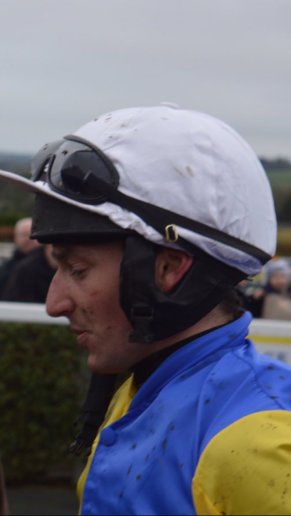 “If I wasn’t a jockey I’d have been a professional footballer” joked 29-year-old jockey Mark Bolger, who is currently relishing his life as a jockey and is gearing up for the new national hunt campaign with an aim to be “victorious on any given opportunity and stay as fit as possible”.

Bolger had his debut racecourse ride on the James Kelly-trained Citizen in a bumper at Naas on 2nd August 2004 and later in that year gained his first winner on the Mick Halford-trained Masamiyr in a bumper at Ballinrobe racecourse for owner the late Anthony Powell, who evidently was a colossal help to him in his younger days, teaching him how to ride and getting him the job in Halfords which indisputable gave him a massive head start in his career.

Bolger is now indisputably one of the fittings in the Commonstown stables in Co. Kildare with Gold Cup winning trainer Jessica Harrington, who has provided him with his principal winners over the past few years, which he is quick to proclaim his gratefulness to her.

“She has given me so much support and faith in him throughout the years”.

For most of his career, horse racing in Ireland has been the only way he has ever known but Bolger does have a few minor proposals that he would like the authorities to take on board like

Away from the hustle and bustle of horse racing Bolger enjoys

“heading to the gym and the odd game of golf “which he feels is a great way to unwind away from the horses.

When his days are numbered as a jockey he anticipations to go onto the pre-training side of things as he would love to stay involved with horses as” it’s all he has ever known”.