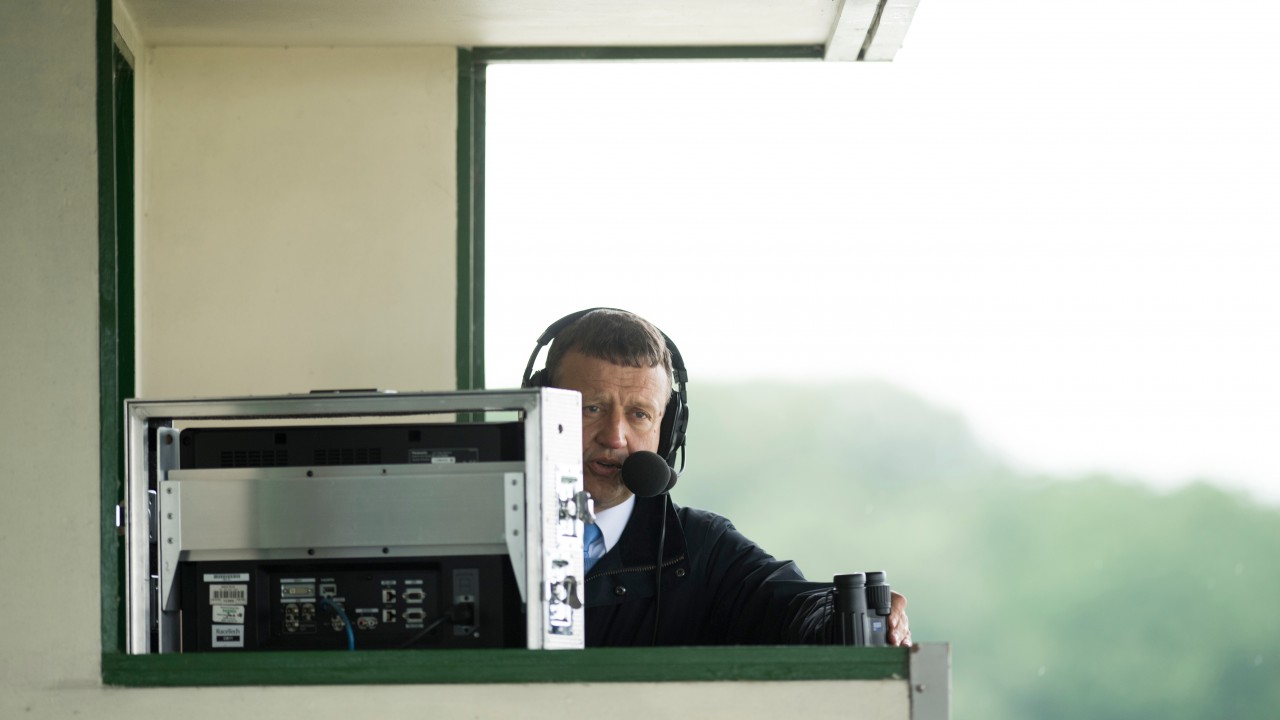 Many of our readers will know you are now on ITV, can you tell us how you started as a Racing Commentator? & Was this your preferred profession?

RICHARD: To be honest I had never considered a career as a commentator so whilst it certainly would have been a preferred one it wasn’t the chosen one. I am a qualified Accountant and that took up the majority of my study time outside the formbook for my early years. Whilst a career in Racing always appealed not having come from any sort of racing background meant it seemed only likely in some financial role.

RICHARD: My break came when SIS advertised in the Sporting Life for   commentators. I was so naïve that I didn’t even include a demo tape with my application and so was initially rejected. Thankfully my demo tape crossed in the post with that letter and fortunately was good enough to get me a trial and things snowballed from there.

What was your first race you commentated on?

RICHARD: My first day broadcast into the betting shops was at Bath on Cup Final Day in 1992. It seemed surreal to be standing in a box at the top of a stand all on your own yet be heard up and down the country. It wasn’t really until I went into the shops on a Monday morning and heard the replays that I really believed it had happened!

Who has inspired you in the commentary world?

RICHARD: My main initial inspiration actually came from overseas, principally Australia, where the style was far more descriptive and colourful (partly as it was often mainly for Radio) than the more formal style adopted on racecourses over here. It was made clear that the remit we were being given by SIS was to try and increase the colour so they were an obvious source to learn from. As such Bill Collins (known as ‘The Accurate One’) was the caller I most admired. His call on the 1986 Cox Plate between Bonecrusher and Our Waverley Star was years ahead of its time.

How much research goes into your work on a daily basis?

RICHARD: Whilst the colours are only really learnt on the build up to the race my pattern of preparation is pretty ingrained now and mainly takes place the night before. Once the fields are printed off then will go through checking all the names for tricky pronunciations, jockeys and trainers and owners. I also highlight mares and greys and any obvious storylines that may be associated with a particular runner such as won the race before, on a hat trick etc.

One of the most common misconceptions is that specific lines are prepared in advance. Personally, the key is to be aware of the potential story and hence editorially where the emphasis should be if a horse is clear and the result not in doubt. Pre-prepared lines are very dangerous as they may not accurately reflect what is actually happening in the race. Being half way through a rehearsed script only to find Black Caviar being eased prematurely or Might Bite going walkabout is fraught with danger. Know the story and trust yourself to find the words.

I will also note overnight prices at that stage so can cross reference to markets close to the off and be aware of supported horses as well as writing out the horses in draw order for flat races and for jumps races drawing a map to include the fences and their numbers.

You have commentated on many race’s you must have one or two that stand long in the memory?

RICHARD: Personal favourites are Denman’s Gold Cup, the Nassau battle between Ouija Board and Alexander Goldrun , Don’t Push its National and Pilsudski’s Japan Cup which I was sent to cover from Hong Kong at very short notice and did a massive amount to help my career.

They are my favourite races. Others would have to judge whether the commentaries did them anything like justice

How has the art of racing Commentary changed since your first day until now?

RICHARD: The main change is that in the early days there were no colours printed and so they all had to be drawn by hand. Whilst that was time consuming it gave you a massive advantage over the spectator and as long as you sounded confident then you could get away with a lot more than you can now when everyone has a set

The advent of in running betting has been the other major change. Prior to that a punter placed a bet and as long as you put the horse roughly in the correct place it was fine. Nowadays with the facility to bet in the run, someone will want to know what it is in blue travelling well at exactly the same time as someone else wants to know what it is in green. It is impossible to please everyone in those circumstances whilst of course there will always be the element of ‘shoot the messenger’ if as soon as you comment that a horse is going well it falls in a hole

What was/is your favourite race horse?

RICHARD: My favourite racehorse will always be Pegwell Bay. A really well-balanced horse trained by Tim Forster about the time I was really getting into racing. He was one of the fastest away from a fence I ever saw and his athleticism always stood out.

After he had become the first horse to complete the double of the two handicaps at Cheltenham at the November and December meetings I sent a note of congratulation to the yard. Not only did Tim Forster reply with a note on the back of a picture of the horse but a week later a big brown paper package arrived containing one of his racing plates. It still hangs over my front door.

Can you tell us your favourite race course?

RICHARD: Happy Valley in Hong Kong. Having been fortunate enough to call there regularly during my stint in Hong Kong there is no more spectacular sight of a Wednesday night meeting at the Valley

The best part of being a race commentator?

RICHARD: The opportunity to put the sound track to brilliant performances by horses and riders. They are the stars and the art of good commentary is to try and accurately describe events and convey the excitement whilst staying very much in the background.

What advice would you give to anyone, who was looking to take up the microphone?

RICHARD: Practise getting through fields as quickly as possible whilst maintaining good clear diction. Mental agility is key so train your mind to react quickly whilst training your brain to keep calm and make the right choices. Never practise on races you have already seen or know the result of, that especially includes any you may send in as demo tape and always remember the horses are the stars not the commentator.

Do you have any horses for our readers to follow?

RICHARD: After one more run Luca Cumani’s Beyond Recall looks the sort to improve once sent handicapping. He caught my eye at Kempton on his second start and looks a potentially nice horse and one to keep onside.