It has been a Whirlwind few months for Adrian McAllister who has only recently taken out his training licence after the untimely death of his former employer Lady Jane Gillespie, he is based in the picturesque village of Caledon which is on the outskirts of Armagh.

McAllister is under no illusions that training race horses will be an easy task and has sensibly went into this venture with his eyes wide open, stating to us “Work hard and be nice to people and all being well you will get a bit of luck along the way”.

McAllister has always been involved with horses since a very young age, the progression into racing was never in doubt and he was fortunate enough to have the support of local trainers who gave him a taste for the sport and ultimately gave him the drive to get further involved. A four-year stint with Co. Tyrone trainer Andy Oliver was his first proper full time position, he initially started off as a work-rider but his hard graft was rewarded as he was promoted to travelling head lad which he absolutely relished. After an invaluable time with Andy Oliver, he got offered a job in the well-known Ballydoyle stables with champion trainer Aidan O’Brien, “It was a dream come true working there surrounded with the best horses in the world but unfortunately I couldn’t sustain the long commutes to work every day” states McAllister.

After deep consideration McAllister considered it best for his career to move back closer to home, he unexpectedly got offered to work a few mornings with Willison Dennison, this influenced the opportunity to get a lucky break in becoming assistant trainer to Lady Jane Gillespie, which he was honoured to accept, “These sorts of posts don’t pop up too often, she had great confidence in me from day one and I learned so much from her, I am forever indebted to her for the opportunity and faith” insisted McAllister.

Now settled in his role as principle trainer in the legendary Caledon Racing stables with ten horses currently in training, with the amenities for more, however presently it’s quality over quantity and this is mirrored by the five winners he has had over the past few months including his most recent victory at Dundalk Stadium with the well handicapped Bien Chase, “It is never easy to win races in Ireland but thankfully over the past few months our hard work is paying off” added McAllister. 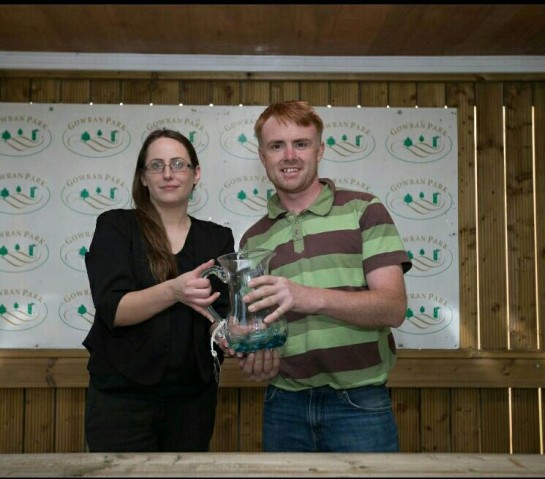 Each morning McAllister commences work at 8pm for feeding time then he must check the horses’ legs and look for any abnormalities or injuries which may have occurred during the night, then it is time to ride them out and muck out the stables, next the horses get their evening feed, along with this he also travels to Lee Valley training Centre in Co Meath twice a week to work the horses, “It’s not an easy job but to be very honest I wouldn’t have it any other way” stated McAllister.

Having a winner anywhere is the principle aim of the game however McAllister insists getting a local winner would be memorable and something he is endeavouring to achieve soon, “It would be fantastic if I could get a winner at Down Royal or Downpatrick as they are fairly local tracks and it would mean a lot to me to accomplish that on home soil”.

Commonly, the everyday punter deliberates the massive financial burden of getting a horse in training, though McAllister begs to differ insisting, “The best way to get involved in race horses would be to set up a syndicate amongst friends as it is reasonably cheap and you still get to experience the thrill of a day at the races and hopefully a success along with regular visits to the yard”.

We put the question to this gifted trainer, which of his horses our readers should be watching for next time out and he informed us, “GoFortyGo was only beat by a short head at Kilbeggan racecourse recently by Land Hope and Glory, based on that form he should be winning soon for me”.

With every profession, there needs to be a cooling off period and time to unwind and McAllister is no different, he enjoys the odd game of Golf and watching a match off GAA at any given chance, “I love my job but it’s brilliant to get time off to recharge the batteries”.