All eyes on the racing world might have been focused on the Town Moor this afternoon but on a week which brought plenty of rain to the north west which resulted in heavy going, you would be forgiven for thinking that the horses racing at Chester this afternoon would have arrived at the stables next to the River Dee by Noah’s Ark, thankfully the traditional horse box by road proved to be the more popular method of equine transportation.

Away from the final classic in September  it was a case of dreams of Berkshire in October for trainer Andrew Balding and wife Anna-Lisa who was on duty this afternoon after Duretto battled to the line in enthralling finish for the Listed 32Red.Com Stand Cup over 1m4f on the heavy going at the Roodee.

Last spotted when third back here at the May meeting in the Ormonde Stakes over a furlong further, Duretto had a slight setback after that race which kept him absent for 127 days but under former Grand National winning jockey Graham Lee he bounced back to get the better of Across Stars by half a length, It was a steady run race given the conditions but the winning rider got the hold up tactics spot on to take the £22,684 prize down to Kingsclere.

Targets after this afternoon will probably be either the St Simon Stakes at Newbury which Duretto landed last year or a crack at the Long Distance Cup on Champions Day and given that Friday’s Doncaster Cup wasn’t the strongest renewal and the fact that the big race day at Ascot is often run in soft conditions due to its place in the calendar it would be the more logical race to have a go for. 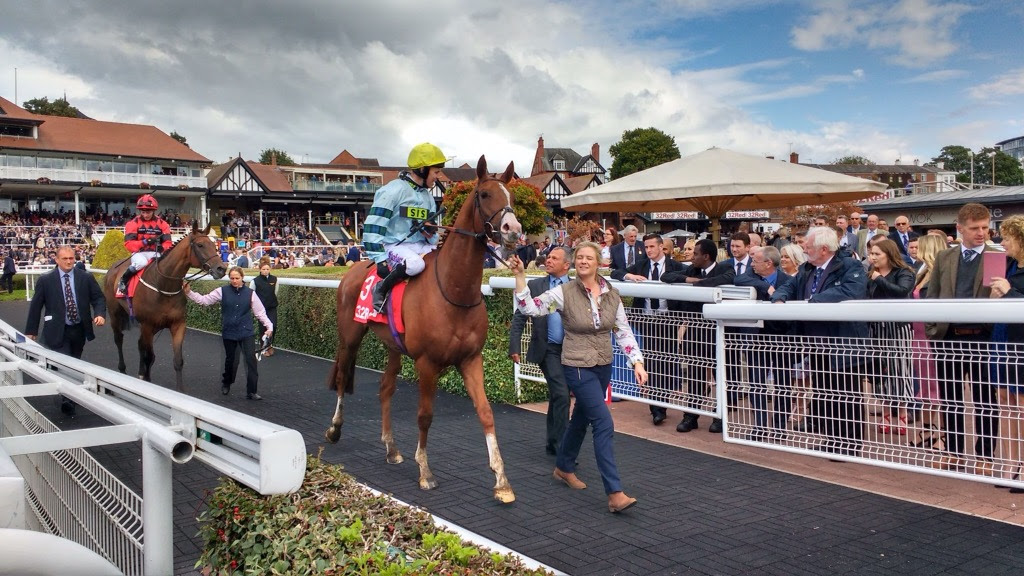 Elsewhere the rest of the day’s racing was pretty average but the crowd which turned up were treated to some good finishes and plenty would have hit the historical city of Chester to sample the hospitality at the many bars,restaurants and nightclubs for the more stamina laden people in attendance with a few extra spends as the first six favourites went in,no doubt causing many a bookie to go on line and set up a GoFundMe account!

Best horses of the day for many experts of the turf would have been first of all Dan Troop when he took the 7f 127yd handicap under useful 7lb apprentice Conor Murtagh, this 3yo continues to climb the handicap ladder and put in a workmanlike performance here to go in off 90, Richard Fahey his trainer will be eyeing some big races for him in the autumn and could be a Lincoln type maybe for next spring providing he can continue his upward curve.

Staffordshire is fairly local in regards to Chester and Jennie Candlish is more known for her jumpers in the heavy but Show Palace showed he is keeping his summer form into the changing of the seasons as he bolted up in the opening 5f handicap under Franny Norton, drawn in box 2 he picked up when needed and looks to have plenty more left in him.

Another local winner came in the 6f Nursery for Tom Dascombe who saddled Porchy Party to claim the prize, already a winner at Carlisle this season he is versatile in the way he runs and can do it from the front or sit in behind as he had to do here despite being drawn bang on the inside.

The 6f 2yo Novice event looked pretty ordinary on paper and the filly Shaya continued her liking for her new life being trained in Yorkshire by Roger Fell,having made her debut two starts back for former Godolphin chief Simon Crisford,she repealed the attentions of Gabrial The Saint to pick her first career win and given Franny Norton a double up on the afternoon,she can make up into a fair handicapper