“His best days are well behind him” was all the pre-race talk regarding the 11-year-old Mr. Hot Stuff, who evidently hasn’t been at his best lately but the never say die strong drive by Irish jockey Danny Mullins, which the horse responded with a rattle to bounce back to form in an exhilarating, heart in mouth finish.

Mr Hot Stuff the oldest runner in a field of eight came back in the dying strides to overhaul Robert Kinsley’s Modem by a nose in the $400,000 Grand National at Far Hills Races.

A runner in the 2009 Triple Crown series, Mr. Hot Stuff turned back three overseas competitors in the 2 5/8-mile Grand National, all of whom ran somewhat unsatisfactory races over Far Hills’ firm turf course.

On an afternoon that reminded of a late summer more than mid-autumn, Mr. Hot Stuff’s performance recalled earlier glory days. He won the 2013 A. P Smithwick Memorial Steeplechase Stakes (NSA-1) and seemed to be on the cusp of reproducing his flat form, in which he earned a spot in the Kentucky Derby Presented by Yum! Brands (G1) starting gate with a third-place finish in the Santa Anita Derby (G1). 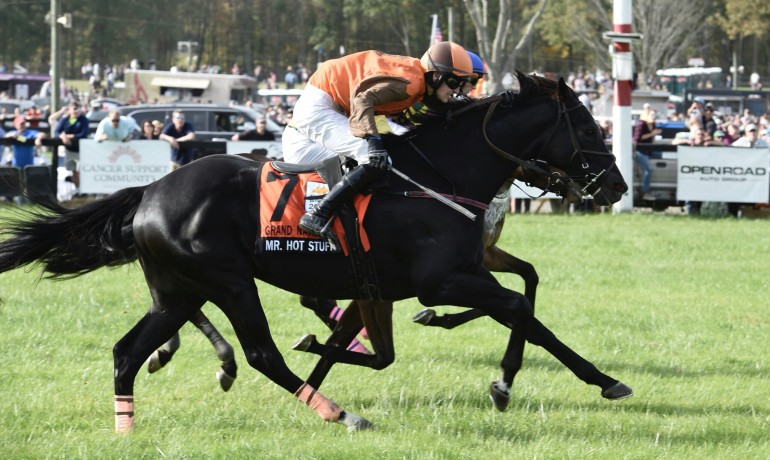 The Smithwick Memorial was a ray of promise, but Mr. Hot Stuff missed the 2014 season, came back to run credible in 2015, and then missed all last year.

He returned with a gallant effort in a grade 3 race this spring, but showed nothing in his next two starts before he finished fifth in the Lonesome Glory Handicap (NSA-1) at Belmont Park, which was won by Jonathan Sheppard-trained All the Way Jose Sept. 21 and connections thought the dream perhaps may have been over but the horse had other ideas.

As the commencement of the Grand National, Mr. Hot Stuff kicked away with top Irish jockey Danny Mullins and alternated on the lead with All the Way Jose, ridden by leading jockey Darren Nagle.

Modem, third in three prior Grade 1 races this summer, including the Lonesome Glory, always was in good position under Jack Doyle and made his move as the field hit the final turn.

Mr. Hot Stuff, flashing his class, refused to acknowledge the issue. All the Way Jose wavered ever so slightly, and Modem took over as the finish approached, but Mr. Hot Stuff found a last effort in the shadow of the wire and claimed the victory from the outside.

Johnston, who acquired Mr. Hot Stuff after his flat career, said she never lost confidence in her valiant gelding, who was bred out of the Turkoman mare Sweet Damsel by WinStar Farm in Kentucky.