Our columnist Richard Brookes has decided to pay tribute to the men and women who put their lives on the line for the Sport of Kings.
It often goes unnoticed the job jockeys do, the threat they face every time they jump the saddle. Therefore, this blog is a tribute to 3 of the greatest jockeys we’ve had the pleasure of watching.

Sir Anthony McCoy, Paul Carberry and JT McNamara three of the best jump jockeys to ride in the modern era. I hope I can do them all justice in this blog.

We will start off with JT McNamara who sadly passed away. JT McNamara was left with life changing injuries when falling at the first fence in Kim Muir on 14 March 2013. JT McNamara was an amateur rider. When reading the word amateur straight away you think of someone that is still learning their trade or not the best in their chosen field. That word couldn’t be further from the truth. JT McNamara was an outstanding National Hunt jockey who chose to ride for love, not money. You only have to look at his record to know this is true. He rode over 700 winners under rules and in Point to Points in his career.
In 2006 he set a record of career wins in the Point to Point field riding his 414th winner and continued to extend that record until that tragic fall in March 2013. He rode 16 Cheltenham winners with four of them coming at the Festival with the ride on Rith Dubh in the National Hunt Chase in 2002 showing just what an outstanding horseman he really was. The horse was far from straightforward but the ride JT McNamara give him that day just goes to show how talented he was in the saddle. It’s a fitting tribute that the National Hunt Chase for Amateur riders will be run in his honour at the 2017 festival a race that he won twice himself. 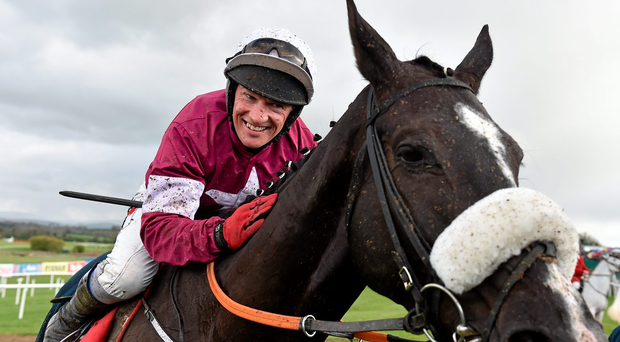 Paul Carberry is the second jockey to feature in the blog. Paul Carberry was forced into retirement back in August after taking a fall at Listowel in September of last year where he fractured his left Femur. His career spanned 26 years and saw him ride in excess of 1500 winners. The highlight of his career was winning the Grand National on his fathers trained Bobbyjo in 1999.
He won 39 Grade 1 races in his career with the most successful horse he rode, Harchibald who he won five Grade 1’s on. Paul Carberry was reknown for his hold up patient style of riding which sometimes saw him criticised for not making his move sooner. None more so on the horse that he partnered to win Five grade 1’s Harchibald who he finished second on in the 2005 Champion Hurdle, where he came there travelling strongly only to be beaten.
While he had is far share of criticism in my opinion the ride he gave Monbeg Dude to win the Welsh National was nothing short of brilliant. The horse wasn’t always the best of jumpers but the way he nursed him round that day and got the better of a good battle with A P McCoy aboard Teaforthree showed what an outstanding jockey he really was. While he may have been frustrating to watch at times with his hold up style of riding he never changed his style and always had total belief in his ability. I personally feel he got a good tune out of horses that many wouldn’t have. Paul Carberry rode his last Grade 1 aboard Don Cossack in the Punchestown Gold Cup and ended his riding career with 14 winners at the Cheltenham Festival.

The greatest jump jockey of all time. He rode over 4000 winners in a career that saw him win the Cheltenham Gold Cup twice the Grand National and three Champion Hurdles to name just a few of his big race wins. He was Champion Jockey 20 times in a row. But what set A P McCoy apart was his drive, determination and desire to win.
He would travel to Carlisle on a wet and windy Monday for one ride. I always remember a quote from him saying people do the same thing over and over again and expect a different result. Time and time again you would see low grade horses improve when he rode them. One good example of this was when he rode a horse called Fredo who was a difficult horse to win with. He never won on him the first time but he took the ride next time out and changed the way he rode him and won on him. This was a low grade handicap on a quiet day. He didn’t need to take the ride next time but the fact he went away thought about how he could get this horse to win for me shows that after everything he achieved over the years is desire to win never wavered.
He was a punters dream as he read the game so well. For me, A P McCoy is someone that people even if they have no interest in horse racing should read up on as if you ever want to be successful at anything then this man as all the key elements for you to achieve your goal. His drive, determination work ethic and sheer hunger to succeed at his chosen field is infectious.
Out of the three jockeys talked about today two had to end their time in the saddle due to injury which just goes to show the dangers that jockeys face every time they go out to ride for our entertainment.