I was incredibly honoured to be given an interview with the legend that is Frankie Detorri.
A 5 time Arc De Triomphe and Gold cup winner. A 6 time QEII winner, not to mention the Derby twice and St Leger 5 times….. I think you get the idea! 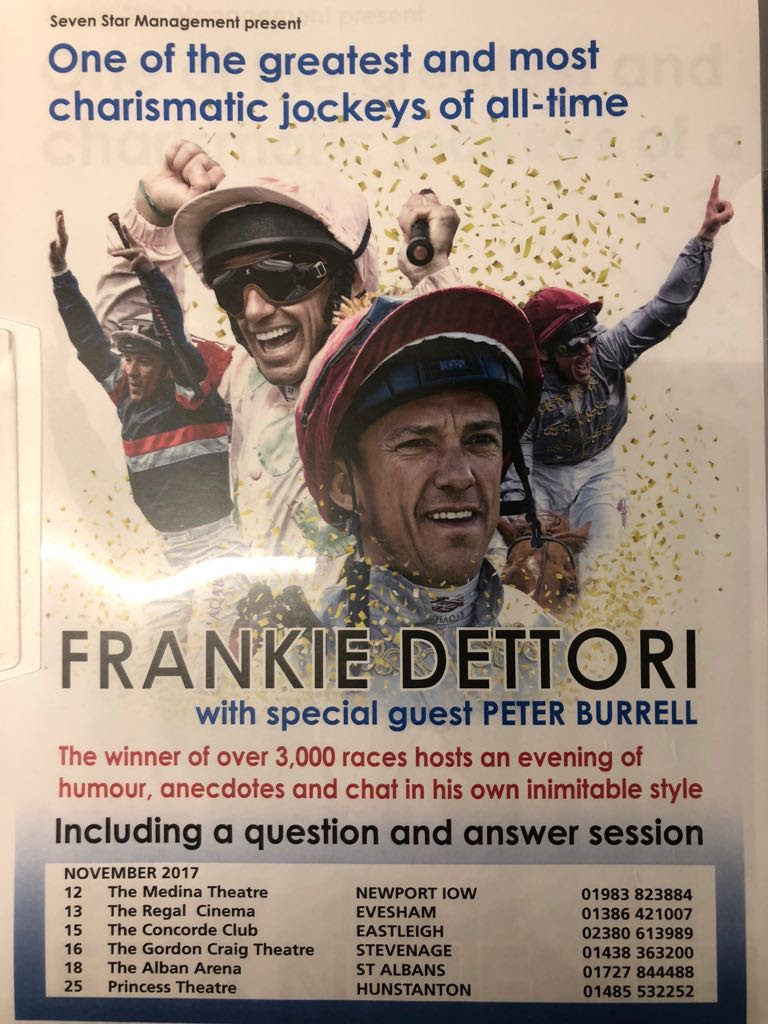 Frankie Dettori, was hosting a humorous night at my local theatre. My family got the tickets as an early birthday present.

I had got there a touch early and Frankie was already doing an interview. My son and I, who was also my wingman, waited patiently. I cautiously walked over to Peter, Frankie’s manager & introduced myself….(Peter kindly helped to arrange the interview).
Was I nervous? Who wouldn’t be?, as I shook his hand. Frankie could tell….  “Are you nervous?”, “Yeah” came my muffled reply. “It’s Ok, don’t be. I’m just a normal guy.” A normal guy, who had just come back from racing at the Melbourne Cup and has ridden over 3,000 winners… Blimey, I’m thinking…. I wish I was that lucky! 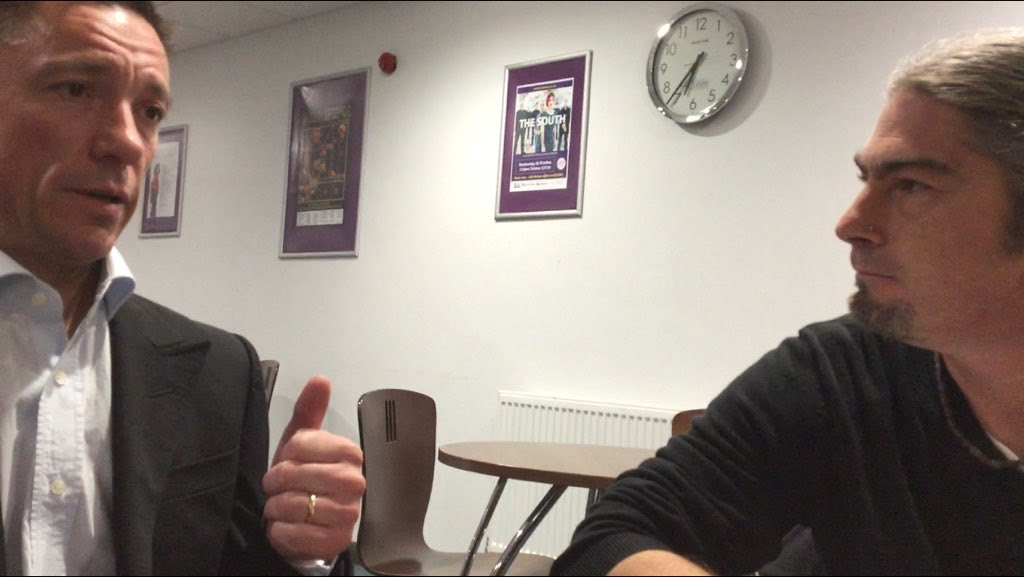 I fumbled around for my book of questions. (Yes I have a book full of questions!). Still thinking, what question should I open with? Finally, I sort my voice recorder out and my son, starts recording on his iPod, so we have more than 1 copy, as my shorthand is rubbish and I was still shaking!
If you have read my interviews, you will know I mainly ask the same kind of questions, in a set order, but I threw that out the window! I am pretty sure, after watching a few interviews while doing some research, Frankie, knew what kind of questions I would ask!
Anyway, enough of the build up, you guys want to know the nitty gritty of it all…. So it was all systems go… And I opened with this….

Who is the Joker in the weighing room, apart from yourself?

Martin Dwyer…… He’s Liverpudlian, always playing tricks on everyone, telling jokes, most of which I don’t understand but everyone else laughs, so he’s the Joker!

What is your favourite track you have ridden?

Has to be Ascot. I had my first group 1 winner there, I have been very successful there. I feel very confident and at home on that track. 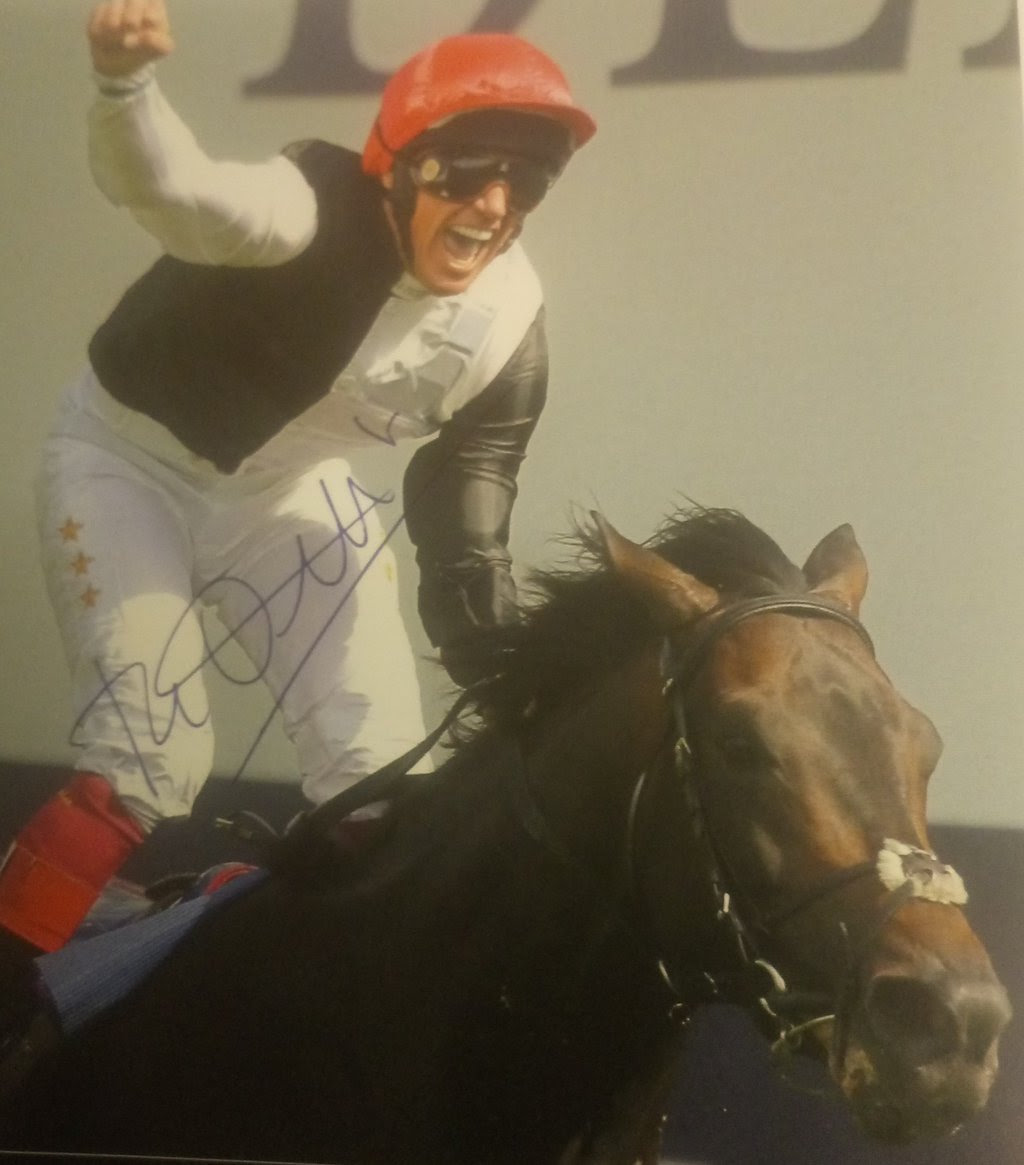 What is your personal favourite race and does it change from season to season?

For me, it has to be the Arc De Triomphe, having ridden in it 29 times, winning 5 of them. As a kid in Italy, they would only show 3 races on TV each year. King George, the Derby and the Arc. Looking up at the TV, it looked like they were racing on the moon. The race means a lot to me, it was one of my childhood dreams.

While we are on the subject of the Arc, were you surprised that Cracksmans’ 7 length win on Champions Day, put him above Enable, despite the field that she beat? The thing is, Enable gets a 3Lb weight allowance, so if you gave her that, she would be on top. The thing is, when you race on soft ground, the distance can be exaggerated. Handicappers are someone’s opinion. I always take it with a pinch of salt and I was just very lucky to have them both.
So obviously I had to ask the Question…..

You have a tough choice next season, Enable or Cracksman, if they happen to be entered in the same race?

I have a year to decide! If we can get them both, at the peak of their powers for the Arc, then I really have a decision to make. So many things can happen between 3 and 4, I am just very lucky to have the best 3 year old filly and 3 year old colt in the world in the same year and I will tackle that bridge when I get to it!

Which led me nicely on to my next question….

Do you think Frankel’s offspring will overtake Galileo’s in time?

He has made a good start. I think it’s unlikely. He has the potential to be a very good stallion but nobody thought that Sadler’s Wells would go on to do what he has……

If you had a choice to ride Frankel, Sea the Stars or Galileo in their prime, which would you choose?

Frankel!. I raced against him, in all bar one of his races and I have only ever seen his backside! I have seen Dancing Brave win the Guineas, but Frankel was head & shoulders above anything I have seen. 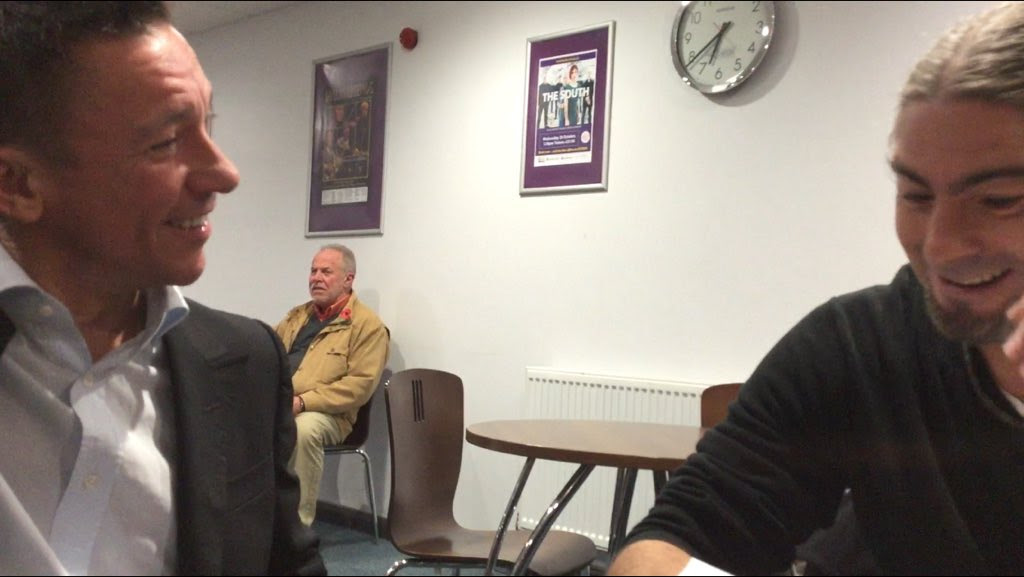 Are you heading to Meydan in the spring?

I am heading to Dubai in February, as it’s quite central in the Middle East. I will ride sometimes in Bahrain, Saudi Arabia, Qatar and use Dubai as a base. If there are a few spare rides, I will take it as I have a lot of friends there.

We all know you are an arsenal supporter, who is the best Arsenal player, you have ever seen?

Thierry Henry, Tony Adams. I have a soft spot for Ian Wright,. Dennis Bergkamp was magic. So many but for me,  Thierry Henry, top goal scorer is the best!

Do you think your Magnificent Seven, will ever be repeated?

I think it can be equalled, but will be very hard at Ascot on a Saturday, but Richard Hughes did 7 out of 8 at Windsor!

The Flying Dismount….. Have you ever messed it up?

Yes, Twice! Once I fell backwards & landed on my backside! The other time, the horse moved as I jumped off and I landed on Sheik Mohammed and knocked him over! He wasn’t very pleased!

When you were growing up, apart from your dad, who was a top jockey, who did you look up to?

My dad was first, then Steve Cauthen in England and Angel Cordero in America. Trying to combine so many styles, but they were the main ones.

If Winx comes to Royal Ascot, as has been mentioned. How do you think the potential match up with Enable would go?

I would take Enable all day long over a mile and quarter. Her best chance of winning is over a mile….

Del Mar was too sharp, as most European horses usually run straight. It was very banked, very sharp and a horrible track to ride. You needed to be on the rail and in the front 3 to stand a chance and was very USA sided. Regarding the rankings, until Winx races over here, it is very hard to tell and Arrogate, has never raced with any Europeans and it’s somebodies opinion!

Do you have a horse for our readers to follow?

Photographer. Related to Coronet, who won on debut at Chelmsford.We shook hands and I thanked Frankie for his time, I went to the bar and grabbed a beer! 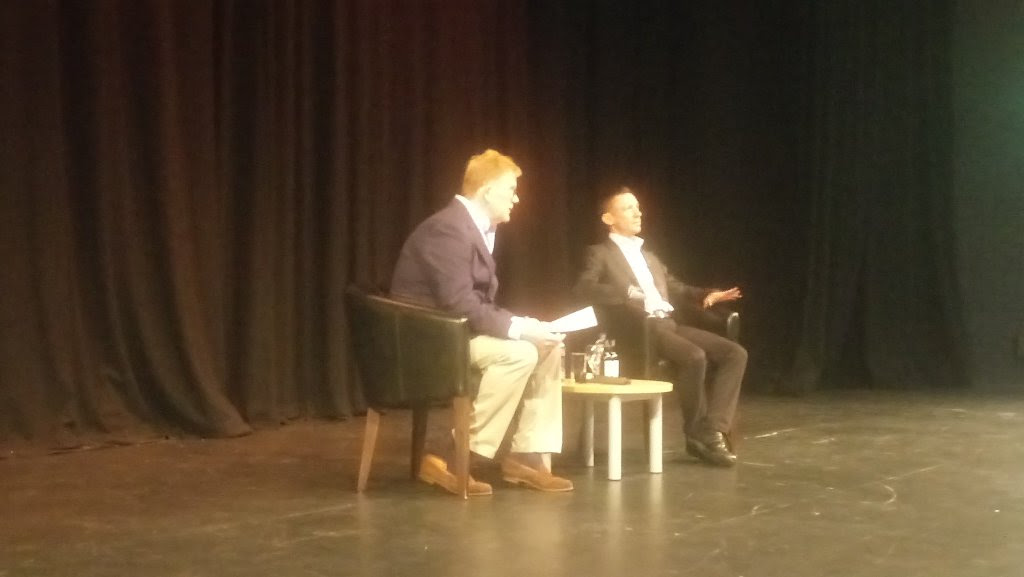 Anyway, the evening started at 7.30, with Peter talking to Frankie. There will be no spoilers from me, but it’s safe to say, my son, who is 15 and has very little interest in racing was laughing a lot! So it must have been a good night! After an hour or so during the interval, we were given the chance to send in questions for Part Two. A couple in particular caught my attention. One which referred to Dodging Bullets and the other was when somebody asked about Marsha & Lady Aurelia! We also had a chance, if we were quick, to get a photo and any items signed. I  had already got my book signed after the interview but forgot to get any pictures! Needless to say we joined the ever increasing queue, grabbed a photo with Frankie, and my son also got an autograph! 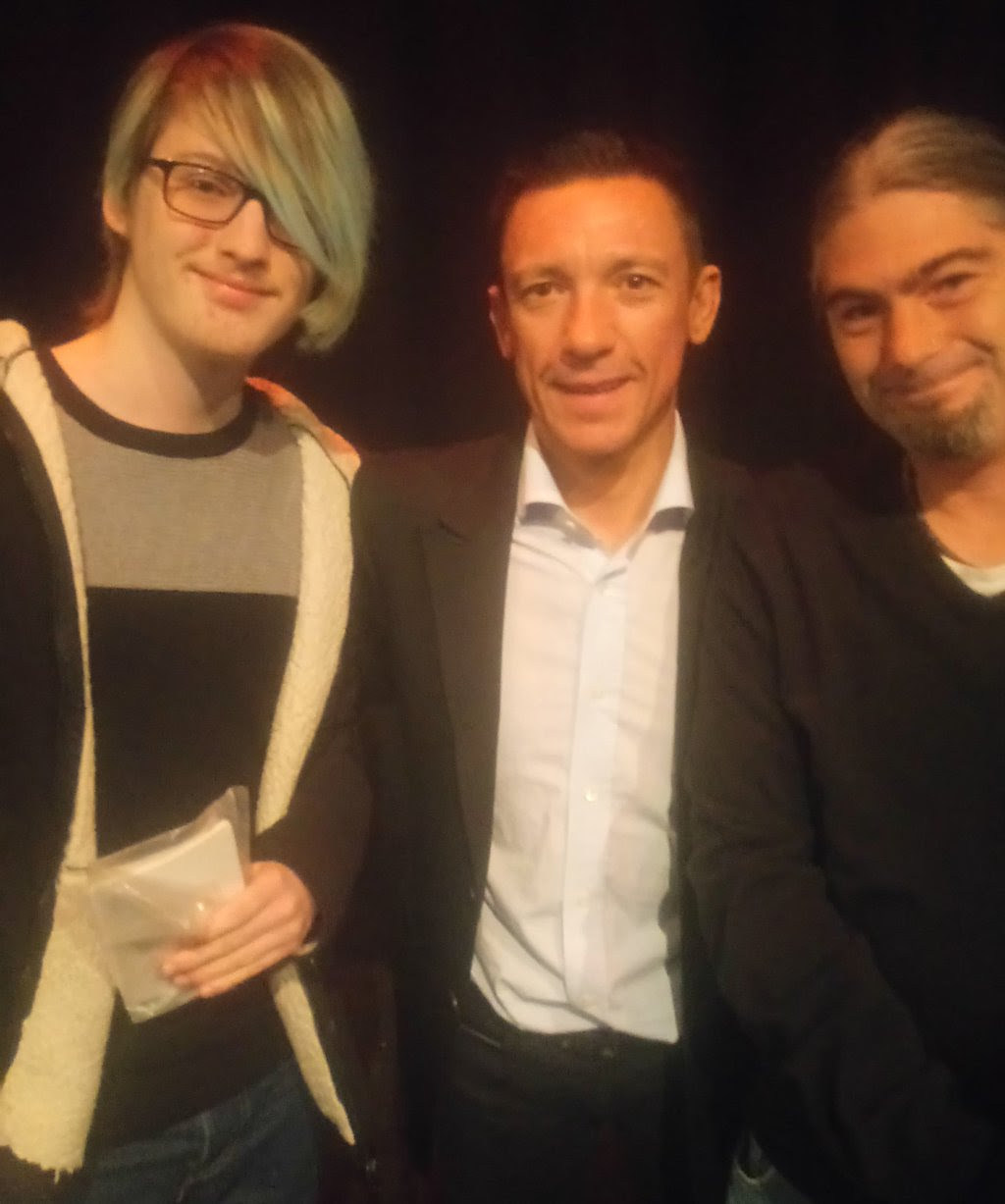 It was a fantastic evening and I would recommend it to you.  Go see Frankie! I would like to say a huge list of thanks. My family for my birthday treat. My son Kurt, who was my camera tech and wingman. Peter Burrell for  allowing me access for the interview and being a gent. Finally to Frankie. For his time, passion, joy, devotion to racing and all the memories he has helped so many create, with plenty more to come.