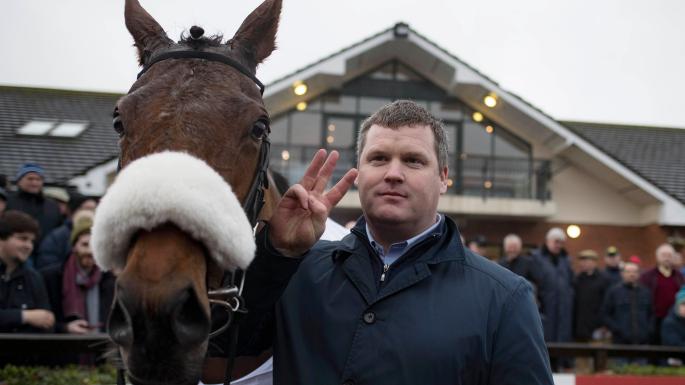 A Sunday of all Sundays for Gordon Elliot, gaining victory in all three grade 1 races in Fairyhouse. Mengli Khan Apples Jade and Death Duty, all bearing the powerful Giggintown silks were trained by the county Meath man.

It’s a sign of how quickly he has rose in stature in this game that it came as no great surprise and after last years near miss finishing second in the trainer’s championship he is on the right track to go one better. As the racing from Fairyhouse wasn’t on RTE (which is disappointing) I watched the superb coverage on At the Races.

The Sunday Forum from the track was a breath of fresh air. With Gary O Brien in the hot seat, Kevin Blake Matt Chapman and Ted Walsh engaged in topics with passion and in-depth knowledge but mixed it with humour and boldness, which is what we all need from time to time. We had three people with opinions, not worried about the implications of what they say on betting markets as we see with Jockeys and trainers from time to time. At the Races must be praised for the quality action and detail we had to savour as racing fans from Fairyhouse, but like everything there is room for improvement. The question of HD cameras was again mentioned on twitter and it is something that should be a given in this day in age.

On track Espoir D`allen was an impressive winner of the first race for Gavin Cromwell and Barry Geraghty, he was held up and Geraghty made his move three out to win easily from Mithchouka. As we saw last year in the Juvenile Hurdle division horses will be improving as the season progresses and its unlikely races will be riding as slow as last Sunday, but Cromwell will hope to dominate more fields as he did on Sunday.

The Royal Bond is a race that very often throws up top class horses. Mengli Khan could follow in the hoofs as he was an ultra-impressive winner. The second season novice has clearly improved and grown into himself over the summer. He was well backed throughout the morning and moved away from Early Doors in second, who also showed potential and kept on well in second.

That was the beginning of Gordon`s treble but the best was yet to come. Apples Jade had got a run under her belt but as I mentioned last week I had fancied Nichols Canyon to give her a good test. How wrong was I! She produced arguably her best performance dominating from the front to win as she liked by 9 lengths. Both Michael O Leary and Gordon Elliot spoke about the Mares Hurdle being her only target in Cheltenham. This is the smart choice in my eyes, but she is currently trading at even money in some places for the race, and as we know the Mares race has a habit in recent times of surprising us. Death Duty was the final piece of the jigsaw for Elliot. The talking horse of 2016 showed that the trip of two and half miles is certainly his optimum and he dismissed the excellent Rathvinden. Where Gordon will go with Death Duty now is an interesting question, will he go to Cheltenham in March with a shot at redemption? I wouldn’t bet on it. On Saturday Blow by Blow who was such an exciting bumper horse was caught on the line by Discorama in the Maiden Hurdle, while Minella Encore who I had tipped up as a horse to follow last week won the bumper, but he didn’t make it an easy watch. He is a horse that works very well and should be even better with a trip.

In Britain Total Recall was a game winner of the Ladbroke Trophy for Paul Townend and Willie Mullins, a huge win for the team and I’m sure it was sweet victory for Willie after years of trying and weeks of planning.

Buveur D`air won the Fighting Fifth Hurdle as he pleased but in all reality, it was nothing more than a schooling session. Kempton will certainly be his next port of call but such poor opposition in his company we won’t know until March how good he is. Buveur D`air is only six and it’s not out of the realms of possibility that he will improve this year, but he will have to improve if Faugheen makes it to Cheltenham on that Tuesday in March.Thistlecrack, Youknowwhatimeanharry and Yanworth were all beaten on Friday in Newbury. Yanworth to me looked a horse that is still learning in the chasing game, but I would love to see him back over hurdles and aimed at the Stayers Hurdle. We saw with Thistlecrack and Harry that the staying hurdle division is one that needs a star. Thistelcrack travelled well but found nothing and fell off the TV screen. He drifted out to 8/1 in the King George market, and I wouldn’t be backing him for love nor money. This weekend’s racing is again a mouth-watering one Douvan, Un De Sceaux, Fox Norton, Sizing John, Brain Power and Finians Oscar all expected to run. A race fans dream.