There’s nothing flashy about this horse but all he has done is improve and improve. He isn’t big, but he’s got a big heart” insists Newry born Terry Ruddy who is one of seven syndicate members in the seven-time winning horse “Colms Dream”.

The Ballybot man has always had a keen interest in horses, he reminisces that it first began in primary school, when he used to attend the yearly Newry Horse show
and observed the show jumping and was mesmerized by it all, in later years
he went racing to the old Dundalk racecourse at Dowdalls Hill. “I never
thought that I would ever be involved in the ownership of a racehorse though” adds Ruddy.

Colms Dream was bred by the late and great Colm Farrell, who tragically passed away and left behind a heavily in-foal mare African Waters, “One-day Ken Farrell, Colm’s brother rang me and was wondering what to do about the colt which came from African Waters, I suggested forming a syndicate, which was agreed” stated Ruddy.

“We didn’t know what to make of him as we had no experience with horses. However, the man who broke him thought that the horse had talent and could be worth ‘chancing’”.

The horse was then taken to up and coming trainer Karl Thornton in North Dublin and after he galloped the colt a few times the trainer believed that there was something there to work with and he evidently held plenty of promise.

“Though It was only after seeing him race a few times, the penny final dropped to me, that I too could see that this horse was as genuine as they come, and our syndicate was on to a good thing” recalled Ruddy.

The 2015/16 season was an outstanding year for the Colms Dream syndicate as the talented colt won seven times and unquestionably paid his way for the syndicate, however the improvement came to a halt as the horse had had a slight problem with one of his fetlocks and a cist appeared which required an operation to remove. 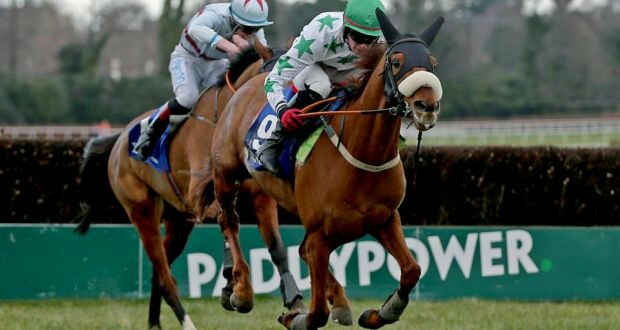 Since the Spring Colms Dream has been kept indoors for two months to help with his recovery, then he was put out to the fields until the Autumn but thankfully he clearly is getting stronger every day. To aid further healing he has been sent to an equine pool facility where he was swimming every day for 6 weeks.

Since his recent return to Thornton’s stable recently in Dublin he has been cantering and swimming three days a week, his training regime has been intensified in the past few weeks to boost his fitness ahead of his anticipated return to the racecourse at Leopardstown on 28th December in a hurdle race. “All being well we have plenty to look forward to for the rest of the season but so much depends on the horse staying sound” insists Ruddy.

“It is really fantastic to have watched him win seven times, it has been one of the great pleasures of my life in recent times. My daughter Niamh was with me the first day he won, and my granddaughter Alma was there the last time he won” adds Ruddy.

People always deliberate getting involved in horse racing syndicates believing it comes with a massive financial burden but that is not the case anymore. There are so many options available for all budgets and the opportunity to get a winner on the track is something that you will never forget. “My experience in a syndicate has been brilliant right from the start and there has been so much fun along the way, we meet every couple of months and everyone is kept informed in all aspects of the horse and the finances” states Ruddy. 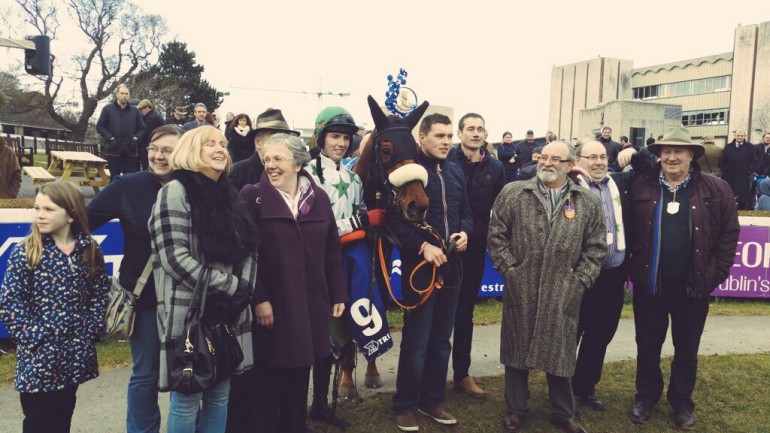 Away from horse racing Ruddy enjoys socialising with friends, having a couple of drinks and is always up for a bit of craic and at any given opportunity he has well known for traveling up and down the country dancing at the weekends with his partner Rosaleen and being with their long-time friends Winston and Teresa.

We could not let this gentleman without giving our readers a few horses to follow for the jumps season, “there are so many good animals in the big yards it is difficult to separate them, but I am optimistic Colms Dream should go well and give us another stellar season, though I hope I am not tempting fate” jokes Ruddy.

There is no denying that presently Irish horse racing is dominated by powerful millionaire owners such as Michael O’Leary and JP McManus, but that does not concern the Colms Dream syndicate as they have an animal well up to challenging the big boys and with a bit of luck we will be seeing the syndicate’s prominent green and white silks in the winners’ enclosures numerous times throughout the season and who knows in time this well-bred horse could well be lively challenger in the Grand National as Colms Dream is a horse destined for big things and Newry Man Terry Ruddy is keen to embrace every moment.