Kevin Manning has been around a long time, in which seems like for ever. He rode his first winner in 1983 and has since been always been a firm favourite in Irish racing.

Since day one in the saddle he has been linked to his Father in Law’s Jim Bolger stable and is in fact the longest serving stable jockey in Ireland or Britain.

He is certainly not outspoken and evidently lets his riding do the talking, as sure the Sun rises every morning, it’s a banker bet that Kevin will ride numerous big race winners every year with his calm and collective approach in the saddle.

Top level success is of course no stranger to Kevin, in a roll of honour that includes the Derby, Guineas, St James’s Palace Stakes and Oaks to name but a few, it should be no surprise to anybody when the combination of Bolger and Manning pop up with big race wins. 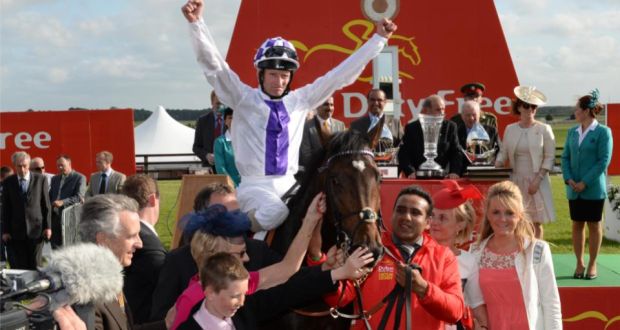 At the beginning of every season the masses of racing fans nose-dive blindly into the turbulent pool that is early season maiden races and call for the Bolger/Manning lifeboat to come and rescue them in the shape of the next Coolcullen superstar and each season the duo never fails to disappoint.

Now with the racing superpower that is Godolphin added into the mix having expanded their interests in Irish racing, it seems like a matter of time before Kevin will be throwing is leg over the next big thing.

Never one to panic, so aptly demonstrated when faced with a wall of equine flesh two furlongs out he delivered New Approach to take the 2008 Epsom Derby, his coolness and ability to perform under pressure is something that any jockey would envy, he can have the lightest of touches or a firmness capable of making the mind up of any wayward animal, a racing mind and an infallibility when it comes to putting horses in the right place at the right time.

As part of the Coolcullen team he has had a hand in the winning of races and the making of stallions. The Darley stallion New approach, himself a son of a Bolger trained mare in Park Express, sired the excellent Dawn Approach in his first crop, a four-time group 1 winner, who incidentally recorded a time faster than that of the great Frankel in the Dewhurst, Guineas and St. James’s Palace and now stands alongside his sire at stud.

Manning has proven his ability to deliver time and time again, The stalwart of the Irish weigh room will continue into the future as a favourite of the punters.