One year on from the tragic passing of Many Clouds, we look back on what can only be described as a life well lived, turning Many Clouds into an equine legend, who will never be forgotten, certainly not by myself, Trevor Hemmings, Oliver Sherwood, his staff and the millions of National Hunt fans.

Rest In Peace Many Clouds and thank you for the memories.

Trevor Hemmings and Many Clouds

Many Clouds chase history of 9 wins does not tell the full story…..

Foaled in April 2007, Many Clouds made his race course debut on the 21st February 2012 in a Class 6 NH Flat race at Wetherby over 2m, beating Yorkist by 12 lengths…. 2 Graded races followed but was well beaten by Champagne Fever & The New One respectively…..

Given a break from April till October, Many Clouds returned in a Class 4 Maiden Hurdle at Aintree. Finishing 2nd to Gevery Chambertin by 1 & 1/4 lengths.

A November run at Ascot followed & Many Clouds duly won beating Fergall by 4 lengths. 2nd at Wetherby next time out by 7 lengths to Up & Go was quickly followed by a Victory at Exeter by 3/4s of a Length, a 12 length 2nd followed that at Sandown in a Grade 3 Class 1 Hurdle before finally being Pulled up at Aintree in a Grade 3 Class 1 hurdle over 3 miles in April….. Many Clouds season drew to a close & a return in November 2013 over Chase fences….

Stepped up to a Class 2 on November 22nd, Clouds was beaten in a 4 runner affair by 2 & 1/4 lengths by Black Thunder, dropping back to Class 3 for a December run at Wetherby winning by 16 Lengths from Indian Courage.

Aintree for the Grand National Meeting in April was next, Holywell won & Many Clouds was well beaten 21 lengths 4th of 6 runners….. Season over & a return on 2nd November at Carlise…

A Class 1 Listed Chase, Many Clouds won by 1 & 1/4 lengths Eduard, off to Newbury at the end of the month in the Grade 3 Hennessy Gold Cup, ran over 3m 2f, with regular jockey Leighton Aspell, this is when Many Cloud’s rose to prominence, winning by 3 & 1/4 lengths from Houblon Des Obeaux.

A break till January & a return to Cheltenham for the BetBright Cup Chase(Grade 2 Class1) , Many Clouds beat old adversary Smad Place by 1 & 1/4 lengths, the BetFred Gold Cup(Grade 1 Class1) followed in March, but Many Clouds was a distant 25 lengths 6th to Coneygree.

A step up in trip followed as Many Clouds was entered in the greatest steeplechase in British racing…. The Grand National at Aintree, over 4m 3f. A race that has taken many chasers from us, notably at the Chair & Beecher’s Brook…. Many Clouds was a 25/1 shot with the bookmakers at the off…. 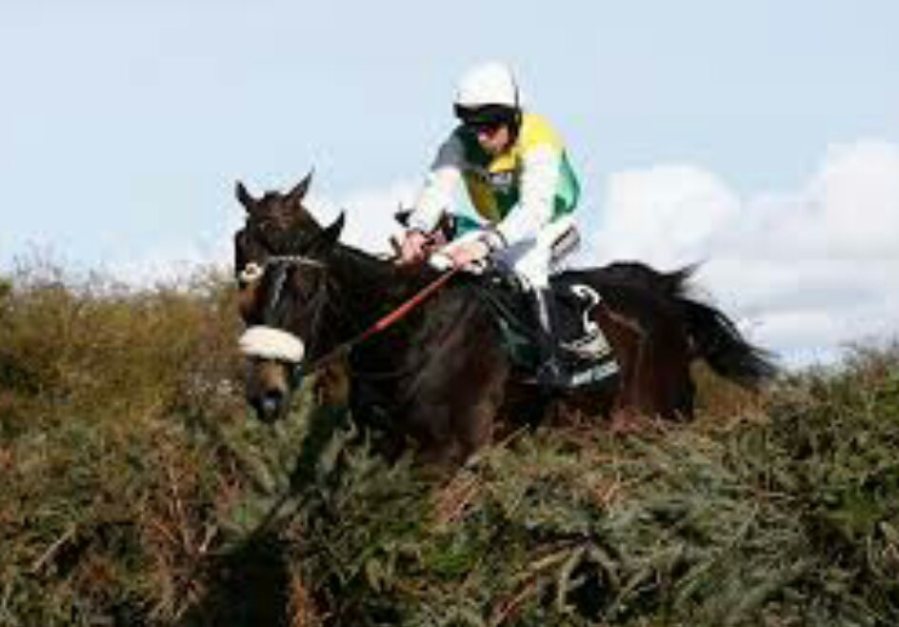 After tracking the leaders Many Clouds started making his way through the field 5 out, with 2 fences to go he was being ridden by Leighton Aspell, by the time they reached the Elbow turn, he was 3 lengths clear, holding on from Saint Are to win by 1 & 3/4 lengths…. Carrying the most weight since Red Rum had won the race 11 stone 9Lbs…The Country hailed a new champion…… 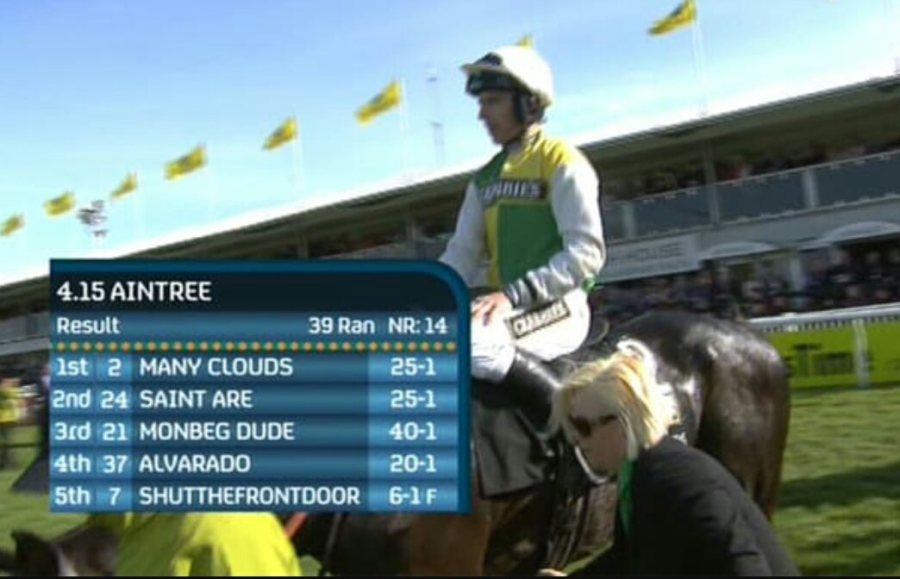 Not too many horse’s win many race’s after winning the Grand National…. Would Many Clouds be different??? I think we all know that answer.

Many Clouds would run 7 more races…… Starting with an October return in the Charlie Hall Chase(Grade2 Class1) at Wetherby… a distant 25 lengths 6th of 7 runners to Cue Card after being out paced & weakening before the final fence…. The Betfred Chase (Listed Class1) followed on his return to Aintree in the December of 2015, finishing a 4 length 2nd to Don Poli….

January 2016 brought a trip back to Cheltenham & the BetBright Trail Chase(Grade2 Class1)….. This time old Adversary Smad Place got the better of Many Clouds to win by 12 lengths & it was looking as if the Grand National Curse had struck again…..

Kelso was Many Clouds next destination & another chance to try & get the Grand National Curse of his back, a Listed Class 1 Chase over 2m 7f.

The Curse was broken…… Many Clouds romped home by 10 lengths from Unioniste, with an Official Rating of 166….. & off to Aintree for the Grand National & a crack at being the new Red Rum…..Retaining the toughest Steeplechase!!!

Sadly it wasn’t to be & Many Clouds finished 16th, 217 lengths behind winner Ruler of the World, season over……. But an Aintree return in December, Betfred Listed Chase (Class1) beating Le Mercury by 3 & 1/2 lengths……

Many Clouds & Thistlecrack going head to head in closing stages of Many Clouds Final race.

We pass on our condolences to Oliver Sherwood, Leighton Aspell, Trevor Hemmings & all the stable staff that cared for him during his Career

As a fan of racing, this was one of the hardest thing’s to write, I had to break the news to my son, who was a big fan of Many Clouds, constantly asking me when he was running again….. RIP MANY CLOUDS…… Jump them fences in the sky

Written by Rich Williams for 3Furlongs Out.