On Saturday May 5th, Mendelssohn will bid to become the first horse trained in Europe to win the prestigious and iconic Kentucky Derby.

On that day, 173,000 people will gather at Churchill Downs racecourse in Louisville, Kentucky, hoping to witness the emergence of a star, a thoroughbred to set pulses racing and energise Triple Crown hopes, the Kentucky Derby being the first leg of American racing’s coveted trilogy of races, the Kentucky Derby, Preakness Stakes and Belmont Stakes.

This year, though, there will be added interest because a horse from Europe – from Ireland, to be more precise – will line-up as a legitimate contender for the $2million race first staged in 1875 and known since 1896 as the ‘Run For The Roses’, following the practice of draping a blanket of 564 red roses over the winning horse’s shoulders post-race.

Trained in Ballydoyle, County Tipperary, by the record-breaking Aidan O’Brien, Mendelssohn’s Irish journey began when changing hands in a Kentucky sales ring for $3million and his first year of racing, in 2017 as a two-year-old, ended with success in the prestigious and valuable Grade 1 Breeders’ Cup Juvenile Turf at Del Mar in California on November 3rd.

By virtue of that win, the dream that he would develop into a Kentucky Derby contender moved a little closer to being realised.

His campaign as a three-year-old was clearly mapped out. He would first run at Dundalk Stadium in County Louth, Ireland, in the 32 Red Patton Stakes, a Listed race run over one mile, one that was part of the ‘European Road To The Kentucky Derby’ series of races instigated by Churchill Downs and staged in Britain, France and Ireland.

Under the gaze of the Cooley Mountains, before a Churchill Downs film crew and an enthralled crowd, Mendelssohn didn’t disappoint, winning by three-quarters of a length from his stable-companion, Threeandfourpence.

He was ridden to victory by Ryan Moore who, if successful in the Kentucky Derby, will become just the second jockey to have won both the Epsom Derby and Kentucky Derby. The first was the great Steve Cauthen, known as ‘The Kentucky Kid’, owing to his birthplace and youthfulness when bursting to prominence as a rider.

Emma Meehan, Sales & Marketing Manager for Dundalk Stadium said: “It will certainly be a first for any European racetrack if a Kentucky Derby winner gets added to the illustrious list of big-race winners seen at Dundalk.  The road from Dundalk still leads to the 144th running of the iconic and historic Kentucky Derby, now worth $2million and still the race that everyone involved in American racing wants to win. That ambition has now seriously extended itself to Ireland and we, at Dundalk will be watching!”

Mendelssohn’s Derby dream, then, was still alive and grew further via an incredible 18.5-length victory in the Group 2 UAE Derby at Meydan Racecourse in Dubai on March 31st. It was a performance that stunned onlookers, broke the local track record and caused his odds for the Kentucky Derby to tumble. 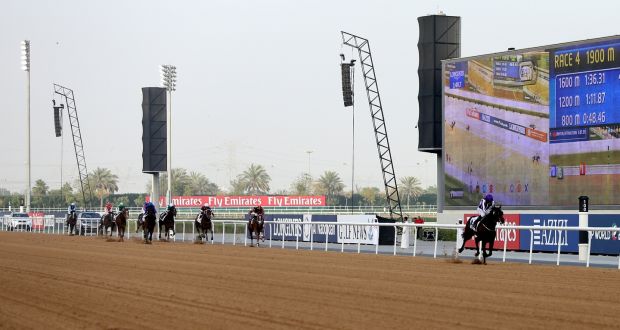 Now it is on to Kentucky, the place of his birth, for the Derby on May 5th. That particular wheel has come full circle.

| #AdvertiseWithUs | For less than £10 per month – Let us take the strain out of promotion – DM 👉@3furlongsout pic.twitter.com/qQ6F14mNRS