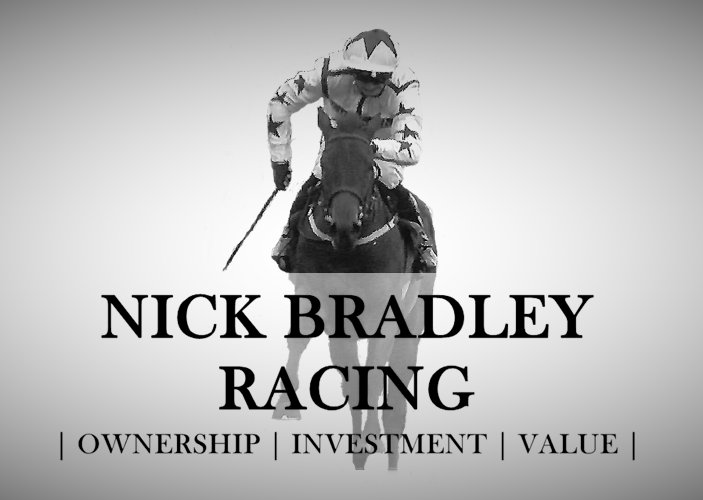 Nick Bradley Racing offers investors the opportunity to experience full racehorse ownership. You own a share of the horse and receive your share of any prize money and re-sale value. In addition to that, Nick guides owners with regards the chances of their horses winning and of course, owners get free entry into the racecourse when our horse runs!

Mr Bradley has kindly given us four horses in his team worth following this forthcoming season.

A horse who finished 2nd to a nice horse of Mark Johnston’s on debut, he then followed up with an easy victory at Sandown making all under a good ride by Charles Bishop. Oberyn has always been held in high regard by Eve and given he was going through a growing phase when he won at Sandown he should be a lot better horse once he levels off. Look out for him over 5 or 6 furlongs and there’s a race at Salisbury on June 26th where we expect him to follow up. (picture below)

Karl Burke’s 2yos are really beginning to fire after a quiet period in the first part of the season. Karl thinks the world of this filly and she didn’t disappoint on debut when beating some experienced horses with her ears pricked at Carlisle.  Her time at Carlisle was one of the best speed figures recorded this year by a 2yo filly and she did that with ears pricked and idling in front.  A sister to Out of Flames who finished 3rd in the Queen Mary in 2017, this filly is expected to make up in to a Stakes filly and ran very at Royal Ascot recently

To date, Staycation has run three times and has yet to get his in front. Joseph O Brien’s horses are renowned for improving with racing and this colt should be just the type to improve as the season progresses. He ran a solid race on debut finishing 2 1/2 lengths behind  Chicas Amigas. He then ran on Heavy ground which didn’t suit him and then stepped forward at Catterick where he looked the likely winner only to stop in front when he had the race won. Staycation shows lots of speed and natural ability at home and we expect him to be winning soon as he matures and learns about racing.

Immokalee has run once to date when finishing 3rd at Beverley on debut. The form of the race has worked out well with the 2nd, 4th and 5th all winning soon after Beverley. Signora Cabello who finished 4th went on to win the Listed, Marygate at York and heads to the Queen Mary with the 2nd Shumooki. Immokalee was sent off a 2/1 favourite on debut and has always been well regarded in the Fahey yard. She had a little setback after Beverley but is back in full work now and we should see her on the track around the end of June.

To get a share in one of Nick’s horses Click here or email info@nickbradleyracing.co.uk, or phone Nick direct on 07780112636