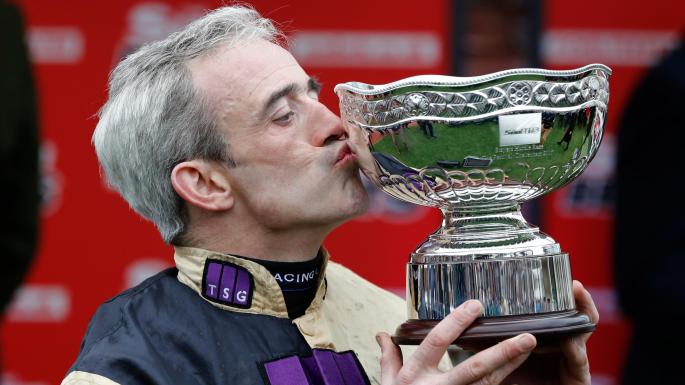 Twelve time Irish champion jockey Ruby Walsh is nearing his return to the saddle after several months on the side-lines, due to a nasty fall at the Cheltenham festival.

Walsh has had immeasurable success in the saddle to-date, his finest moment in the saddle was back in 2000, when he won the Aintree Grand National on Papillon, adding even more magic to that moment, Papillon was trained by his father.

Steering Papillon to success was Walsh’s first attempt at the national race, he just took it all in his stride, navigating his family trained horse to success, some accomplishment by anyone’s standards.

From Galway to Down Royal, Walsh has won over every distance and almost every track, his stature in the saddle is equivalent to a popstar, people often still gaze in admiration at seeing him at the race-track.

As the old saying goes “With great power comes great responsibility” that is very comparable to the way punters react to Walsh’s defeats, they assume when Walsh is booked it’s almost inevitable that this thoroughbred will win however that is far from the truth.

Walsh is the retained rider for champion trainer Willie Mullins, therefor Mullins has first preference on him however when Walsh does happen to have have an outside ride for another trainer the devious bookmakers price up his rides not on their ability, more on the whim that Walsh is booked, meaning the punters are hoodwinked into assuming it has more of a chance than it actually does.

It is notable that certain trainers use Walsh as their go to man, when they think one is ready to strike, including Peter Fahey, James Nash and Tony Martin but other than that I have the belief its not that significant that Walsh is booked, who wouldn’t want the champion jockey to ride their horse if he has no obligation to ride one of his bosses’ horses?

Some punters are seriously clinical of Walsh’s ability in the saddle however taking into consideration he is a twelve time Irish champion jockey, as well as attainting the most successes at the Cheltenham festival, I strongly have the understanding that they are talking through their pockets.

When Walsh chooses to retire it’s almost certain he will go down as one of the most exceptional rider to ever grace our racecourses, so when he is still race-riding why not relish the occasion in enjoying his success, instead of looking for negatives that clearly aren’t there.