County Kildare born jockey Barry Browne is no stranger to big race success, the go-getting young rider is preparing himself for the start of the upcoming national hunt season.

If you’re not among the winners frequently people forget about you however Browne has the hunger to get his name out their further this year. There certainly is no questioning his ability in the saddle.

We had the opportunity to interview with this hardworking young rider, who has the right attitude to make it to the top of his sport.

Tell us about yourself?

I started off working in racing when I was about 14, still in school I would go into Peter McCreery’s and David broads whenever I had time. I then my amateur licence when I was 16 and had my first ride in a bumper for peter in a bumper in Fairyhouse.

How Did you get into racing?

I rode in Ireland as an amateur for a couple of seasons but at the age of 20, I then moved to Evan Williams yard for one season, I rode 3 winners over there for Evan but was struggling to make a living so returned to Ireland and got a job based with Gordon Elliott for 3 years.

At Elliott’s yard I learned a lot in the 3 years spent there however there was always a big line of jockeys waiting in the wings, so I thought it might make more sense to be in a smaller yard so then I moved to Oliver McKiernan’s. Since the first day I started McKiernan’s has been very good to me, my first ride for him was a winner that was Ontheshannon at Naas racecourse. 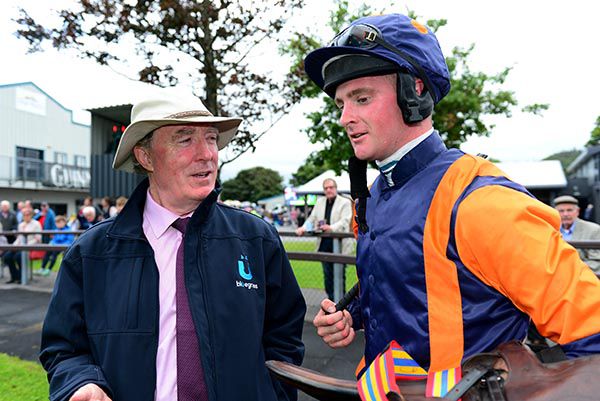 My most memorable winner to date is Swamp fox winning the at the Galway festival. It was a great boast for my profile winning at one of the biggest festivals. I got some kick out of it. My weight was good at the time, so I decided to turn conditional and things have been going good since, I suppose a few more winners would be nice, but I’m getting plenty of rides now and my agent Garry Cribbin does a good job. I’m kept busy ridding out and that’s a big help with my weight, my day would consist of starting in McKiernan’s at half 7 and I would ride about 7 lots there before either going racing, or if I’m not racing I would go to Peter floods and ride a few more.

Peter Flood pre-trains and we have a couple of young horses of our own, it’s nice to still be involved with a few point to pointers, to see them go on and progress. Flood does very well with his pointers.

What would you change within Irish racing?

The one thing I would like to see change in racing is the food in weigh rooms, during the summer it’s hard to pass a McDonalds or Supermacs as it the handiest and fastest after a long day everyone just wants to get home however that’s not ideal and better food needs to be available at the tracks.

Plans for this season?

My aim for this season would be to try better last season’s 11 winners and hopefully remain injury free. This year is my chance to shine.

Oliver has some nice young horses and a one horse I’m looking forward to going jumping is Allforjoy who was 2nd in 4 bumpers. That horse should be able to pay its way this season.

Away from racing how do you unwind?

Away from racing I enjoy going for a run in the evening its good for the head and helps get away from the phone for an hour or two.