Our Columnist Neil Watson attended Betfair Chase day at Haydock and has given us the full review.
In truly attritional conditions that led to at times some unedifying sights of weary but brave horses struggle on through the very heavy ground at Haydock after a week that saw rain,rain and more rain get chucked at this part of the north west,the crowd showed their huge appreciation for a truly breathtaking display of front running as Bristol De Mai made the step up to the big league in some style as he bagged his second straight win of the season by scooping up the Grade One Betfair Chase and showed the other runners who the daddy was much like a lion down the A580 at the nearby Knowsley Safari Park to the rest of the pack as he romped home by a wide margin 57 lengths,a distance which really had to be seen to be believed. Despite being down the field in his last two starts,most notably the Cheltenham Gold Cup and the Aintree Bowl in the spring, Bristol De Mai has clearly gotten more streetwise and smarter during his holidays with this assured performance following on from his recent win at Wetherby in the Charlie Hall Chase, In truth he didn’t have much of a race at all as the rest in behind were virtually walking home in behind, Cue Card under Harry Cobden never travelled well and was pushed along through halfway,Irish raider Outlander never figured and Tea For Two got a bit spooked in the parade ring most notably when “Fanfare For The Common Man” was piped over the tannoy but ran with credit before tiring towards the end. 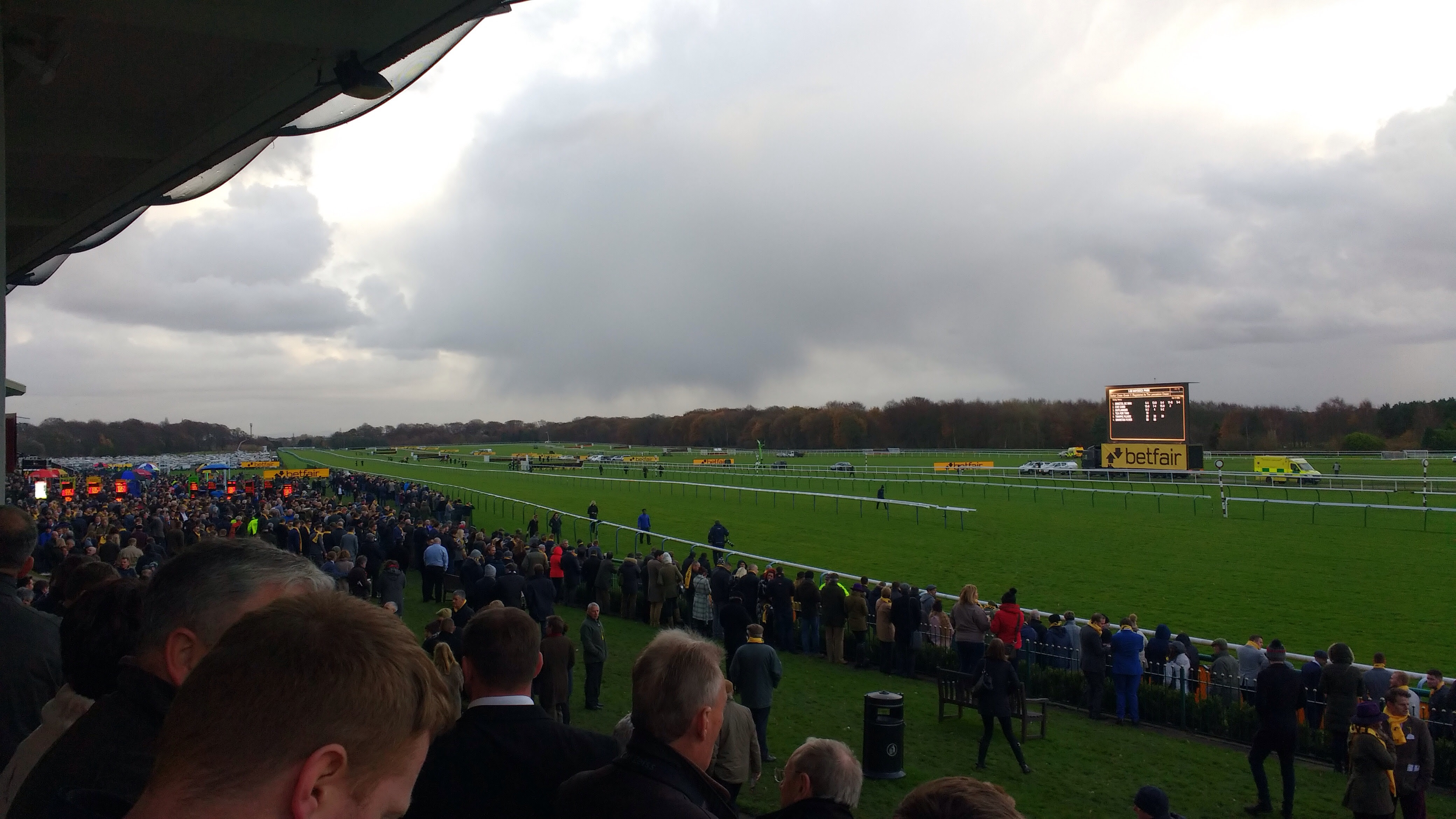 Runners down at the start

Bristol De Mai is more than likely going to head to Kempton on Boxing Day although should Might Bite turn up safe then he may not get things his own way and a better option would be the Lexus at Leopardstown instead, whatever happens we look to be set fair for a real Christmas Classic. 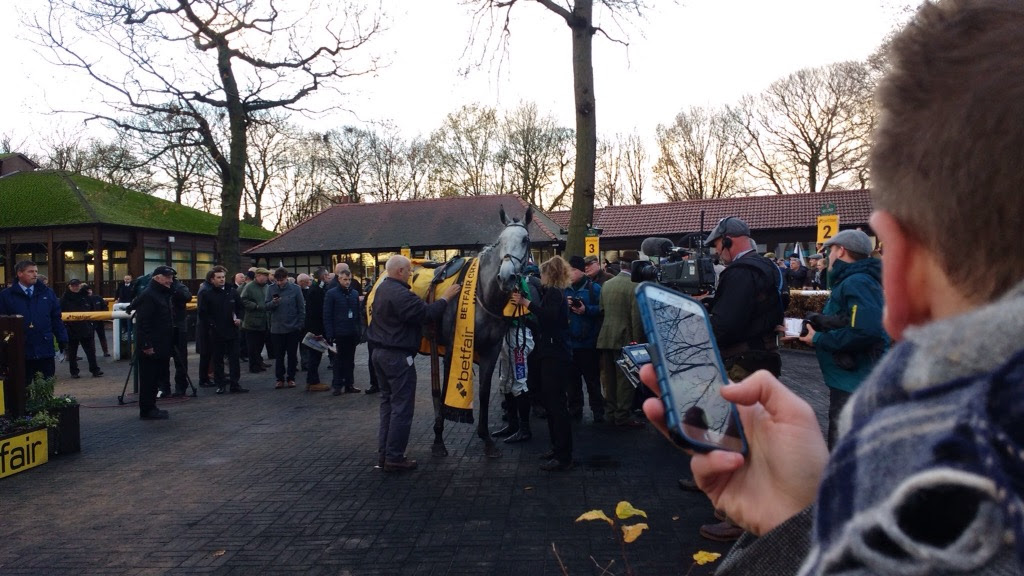 A high quality supporting card on the day brought about some varied finishes but the most visually impressive one came in the staying hurdle over 2m7f and using traditional hurdles as Haydock seem to have got rid of the fixed brush ones which is a shame but Sam Spinner under Joe Colliver bowled out the opposition and enforced a follow on for many of the others as he romped home very easily indeed to give trainer Jedd O’Keeffe a nice Saturday winner here, stepping up to this new trip he relished the conditions making a mockery of his mark of 139 which looks set for a bit of a hike now so he looks to be going up in grade soon and it’s possible regulars will see him here for the Rendlesham as a possibility in February.

Christian Williams burgeoning training career received a huge boost as Limited Reserve landed the 2m3f Handicap Hurdle in good style drawing away from his only challenger Man Of Plenty after the last flight, runner up behind the very useful Elgin on his last start at Ascot he relished the step back up in trip under the very useful conditional James Bowen (5) and should be able to fine more improvement now for his new stable.

As well as the big chase in the afternoon, the colours of Simon Munir and Isaac Souede came good in the first race a Listed Novice Hurdle over very nearly 2m with the Ben Pauling trained Delire D’estruval on only his second start in Britain, fourth at Aintree two weeks ago over 2m4f he benefitted from the drop back in trip but he had to work to land this as Midnight Shadow from the Sue Smith yard just went down by a neck with the very disappointing favourite Dynamite Dollars back in third albeit only by a length or so.

Paul Nicholls’ stable box seldom leaves Haydock empty handed at this meeting and Clan Des Obeaux showed his class to take the 2m5f Graduation Chase very easily in the end in what looked a decent renewal as he brushed aside Vintage Clouds by 7 lengths with the minimum of fuss, apart from a slight error at the fifth fence he jumped very nicely in the end should be more than capable of landing a nice prize somewhere during the season, this trip is probably as far as he wants for now although he should get three miles in time. 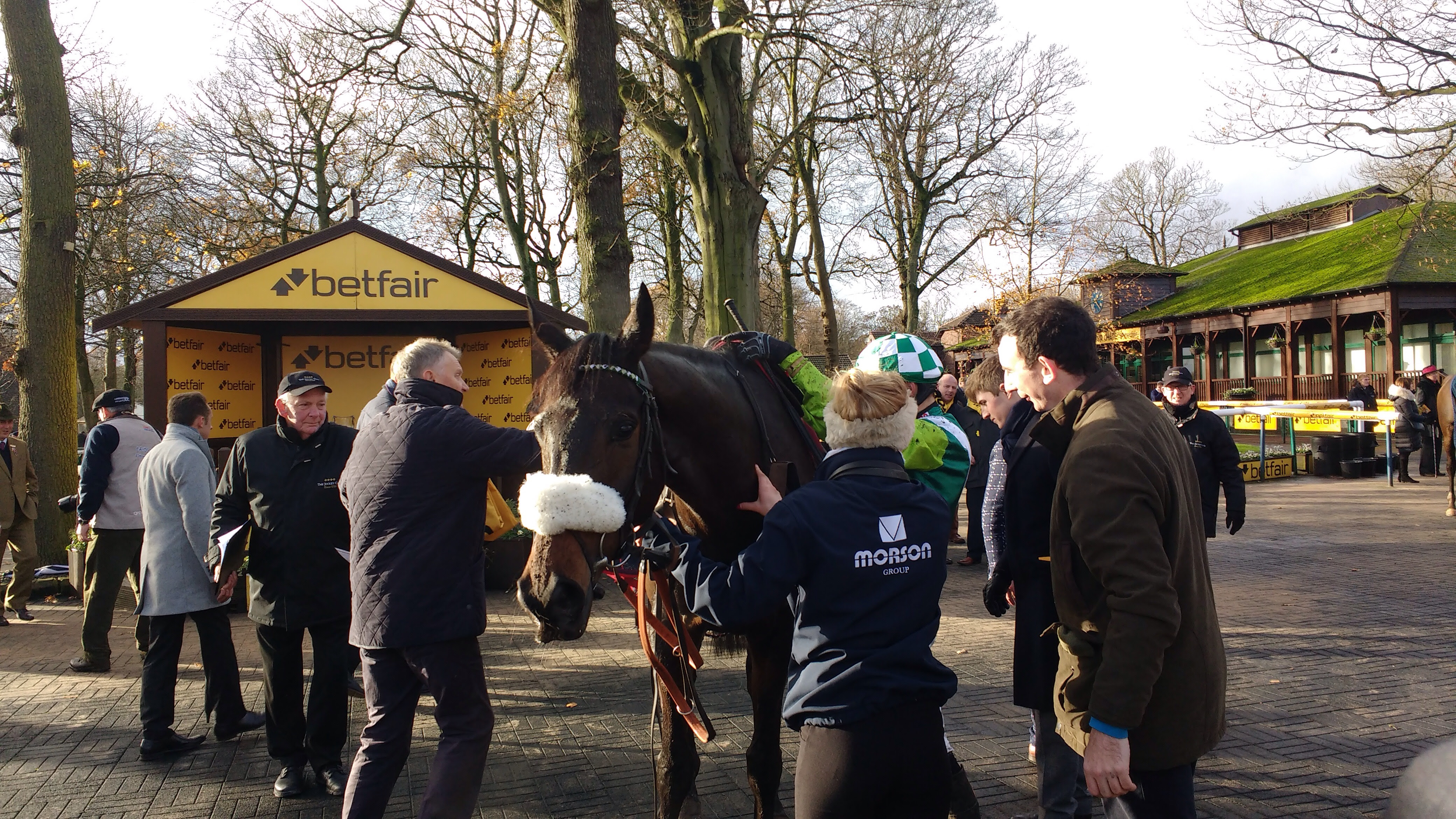 Finally a couple of decent staying handicap chases on the card both brought easy finishes and eventful races, first up the 3m4f race which was taken in easy style by the Sue Smith trained Hainan who left his poor showing at Ayr three weeks ago well behind as he relished the step up in trip under Danny Cook and effortlessly drew 12l clear from favourite Courtown Oscar, Eight horses set out but only four came home so testing were the conditions and this 6yo showed that he could be a force to be reckoned with in the long distance division.

The 3m1f race at the end saw last seasons Midlands National hero Chase The Spud smash his rivals with contempt under Paddy Brennan, this was a very useful victory and should set him up for a pop at the Welsh National in December, just like the other staying race it was a case of eight set out but four came home both I should hasten to add all the horses came back safe and sound.

Fair to say the crowd got their money’s worth this afternoon and while some of the finishes weren’t pretty to see it did show the toughness that both horses and jockeys have to have in winter national hunt racing, Class act of the day without doubt was Bristol De Mai and at the moment it shows that the staying chase division is completely wide open.

Some of the well fancied horses might not have showed their true running today but with testing conditions they can be forgiven.

All being well we return here in about ten days time for a more quiet midweek meeting that should throw up the odd potential star of the future.