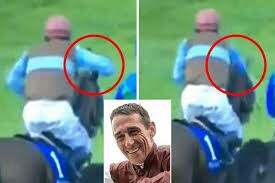 After racing had finished at Tramore on Friday there was only one talking point, especially on twitter with some eagle eyed Attheraces viewers spotting that jockey Davy Russell had punched his mount, Kings Dolly before a race.

Horses are allowed to be shown a fence / hurdle before a race starts, Kings Dolly went galloping up towards the hurdle and nearly jumped it, just slowing up in time. It was because of this that Russell striked his horse in the back of the head. Of course, in this day and age of the social media boom everyone has an opinion, the criticism is warranted as of course it isn’t right to punch any animal on the back of the head, let alone a racehorse.

However, some people have went too far, calling for a life ban and tweeting Russell threating to take violence against him. A life ban should only be given to jockeys who have taken performance enhancing drugs more than once or have hurt a horse on purpose. I just can’t for the life of me believe that Davy Russell would do such a thing, he is without doubt one of the fairest horsemen there is and generally looks after his horses as best he can.

Now I don’t know this for sure but perhaps Davy was having a bad day at the office, at the end of the day we are all human and when our temper is up we can say or do something we don’t mean. It is the same for any sportsman, if you had a pound for every time a footballer, golfer or motor racing driver had a bad day at the office and kicked, broke or swore I would be rich man.

Anyway the bottom line is that I think the necessary Punishment for Russell is a two week ban, and a public apology would be nice too as this incident has cast negative publicity once again on our beloved sport.

I really hope Horse Racing Ireland can get this issue sorted quickly as we don’t want it to drag on and on.