Racing hearts were well and truly warmed up yesterday on a damp afternoon when Haydock racegoers bore witness to see The New One record a fourth consecutive win in the feature Grade 2 Champion Hurdle Trial.

Fans of the great game love their horses and for the regulars at this meeting they showed appreciation to arguably one of the most loved hurdlers to grace the Haydock mud in recent times, he never wins this race easily and has to grind out the result but inevitably the job always gets done, making most of his own running he made a few jumping errors which is nothing new here but had to rally on the run into overpower Ch’tibello who travelled ominously well behind him getting a good tow and did lead with a furlong to go but Sam Twiston-Davies made sure that victory would not be denied as he threw everything bar the kitchen sink at his charge to land the two mile contest.

The Stayers’ is going to be the next race for him at the festival and no doubt followed by a crack at either the Aintree or Liverpool Hurdles in April, whatever happens though he no doubt has the Haydock committee wondering if he deserves a bar and a statue at Haydock as well the race being named after him now. 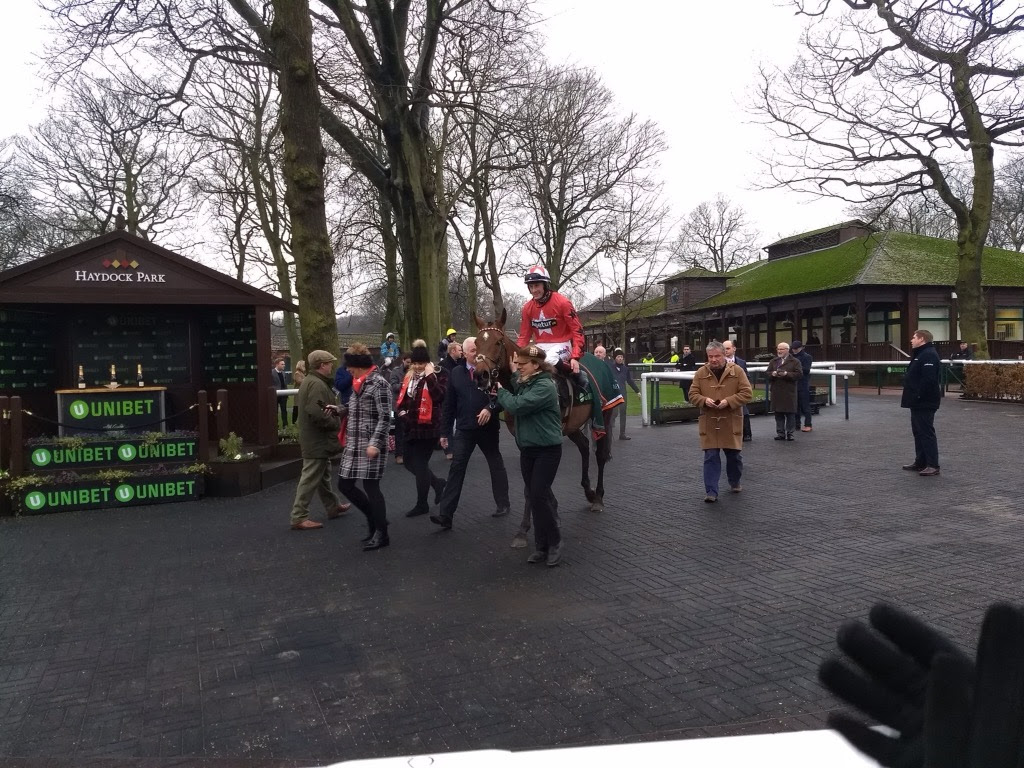 Haydock’s feature steeplechase was the Grade 2 Peter Marsh Chase over 3m1f and in truly attritional conditions only five of the thirteen starters completed the course with Colin Tizzard saddling a useful type in The Dutchman putting three previous course winners firmly in their place as he readily ran away to pick up the prize, right from the go the pace was solid and The Dutchman shared pace duties with Yala Enki who weakened with a couple to jump but The Dutchman carried on remorselessly eventually finishing 13 lengths ahead from Tommy Whittle winner Captain Redbeard.

Having only his seventh start over fences The Dutchman boasted some decent form most notably when runner up to Sam Spinner here over hurdles in November, The Eider is mooted as a possible option next month and he is every inch a tough stayer.

Kim Bailey has a useful prospect on his hands in Full Flow who hacked up by 10 lengths to land the Grade 2 Rossington Main Novices’ Hurdle, given a good ride by David Bass he led after the fourth last and skipped around the far turn by which time the opposition couldn’t stay with him and he landed this 10 lengths ahead of Midnight Shadow, given the conditions he won’t be going to Cheltenham unless it becomes a monsoon so he this might be his last run of the season although Punchestown might be an outside bet as it always seems to be very soft at that meeting 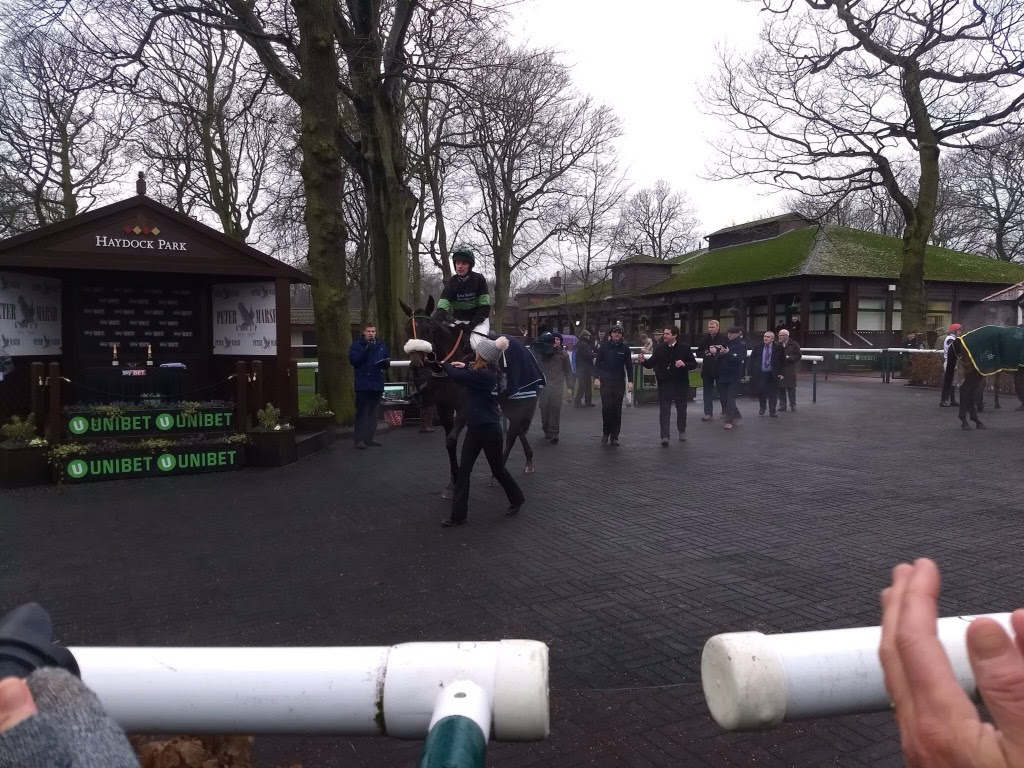 The good run of Donald McCain continues and he saddled a couple of nice winners, first up Testify followed in the hoofprints of horses such as Waiting Patiently and Bristol De Mai to land the Grade 2 Altcar Novice Chase over 2m4f, a bit of gloss was taken off the race when Positively Dylan fell at the second fence which left a match between Testify and Lake View Lad, both kept each other company until the straight then the winner went on at the business end of the race to score by seven lengths, he will be entered in the RSA and JLT but whether he runs beforehand in something like the Scilly Isles or Pendil is another thing. 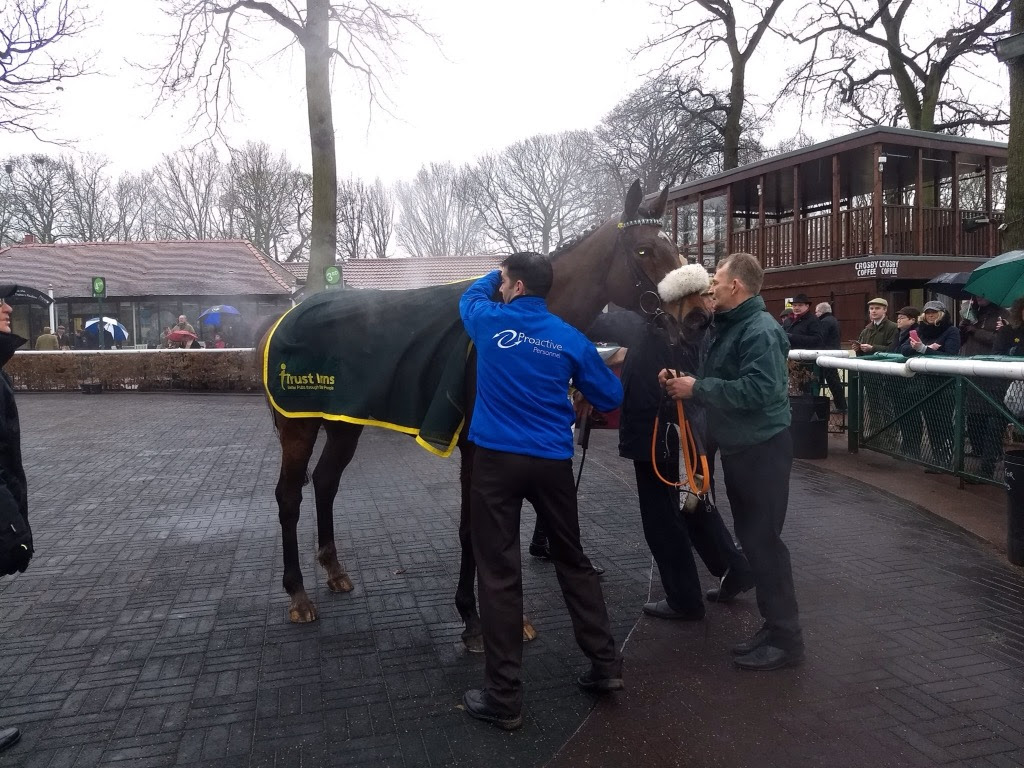 McCain’s second of the day came when Ubaltique took the 2m Handicap Chase for the third year in a row, he looked outpaced up the straight but when the leading horses all fell into a heap he battled on under Will Kennedy to scoop the pot up.

Joke Dancer again showed his liking for Haydock as he just hung on from the fast finishing Reverant Cust to land the 2m Handicap Hurdle, the ground probably didn’t help and connections will be hoping the handicapper doesn’t overreact to his winning mark of 115.

Finally, Chris Grant who is always shrewd with the horses he sends here picked up a nice prize as Donna’s Diamond who hadn’t been sighted since being fourth here in the 2016 Fixed Brush Hurdle romped away to land the 2m7f Peover Handicap Hurdle by a whopping 37 lengths, always traveling well he jumped nicely and looked the winner when leaving the far turn, it’ll be interesting to see how he fares after this.  Donna’s Diamond 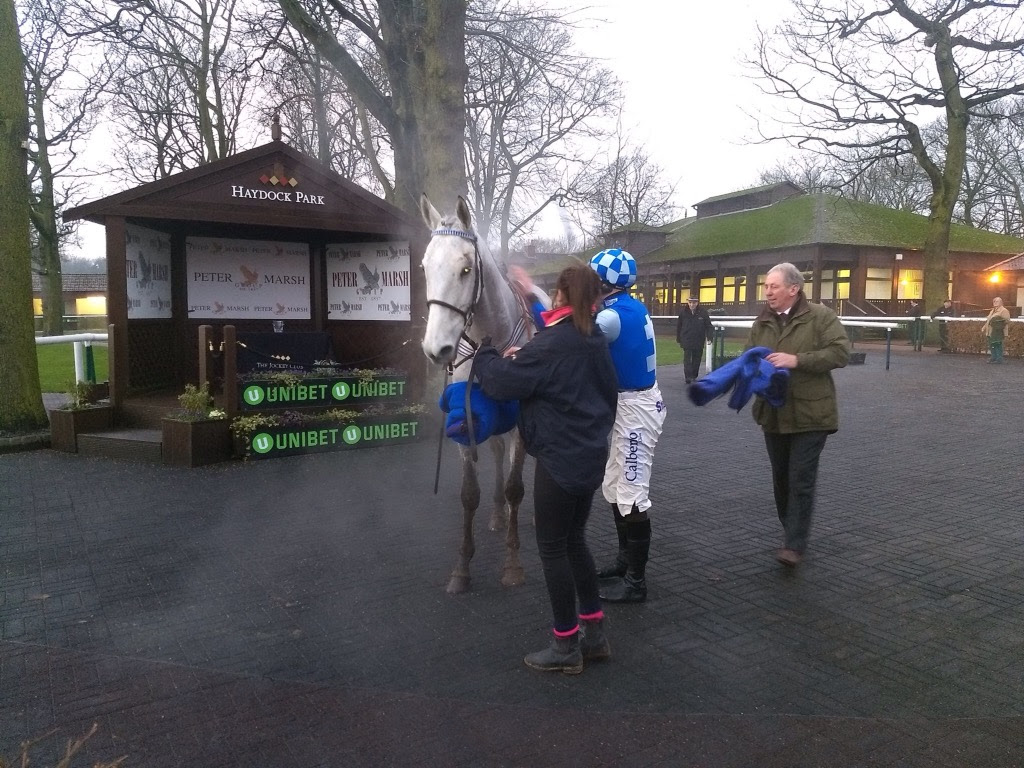 A testing afternoon then at Haydock and despite the bad weather all week trying to derail this meeting from the horse racing railway line the show did go on and the ground staff deserve plenty of praise for not losing the battle.

Without a doubt the star of the show was The New One, he is as regular in landing the Champion Hurdle Trial as the UK are when flopping at Eurovison and deserves to run a big race in March when he goes over three miles.

With the current weather situation, it’s hard to know when the next meeting on here will be so I shan’t make any promises, hopefully Wetherby next month for the Towton will be the plan so till next time, Goodbye and enjoy your racing.