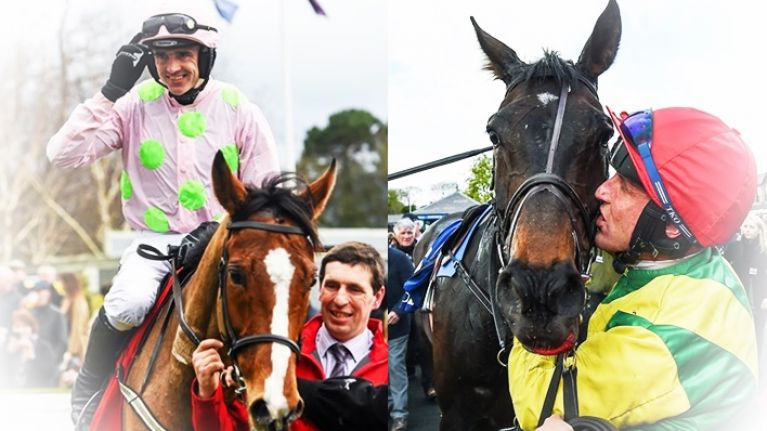 September has arrived at last. The National Hunt proper is nearly here, its stars are back in training now, limbering up for the Autumn and beyond. Last years Cheltenham, Aintree, Punchestown, Kempton, Ascot and all the other feats of jumping heroism are soon to return. As the Autumn nights draw in and the evening race cards fade from view, two of Ireland’s equine heroes are being readied for a much-anticipated return to the track.

Douvan and Sizing John know each other very well, their novice careers were very much intertwined, indeed Sizing John probably knows more about Douvans backside than anyone in the Mullins yard. In what began as a relatively open supreme novices hurdle in 2015, Douvan won imperiously, travelling powerfully down the hill to then assert his authority and pull clear up the Cheltenham hill, with Shaneshill and Sizing John trailing him in for the place money. A year later the 2 were back for the Arkle, Douvan was magnificent again, dominating the 7-runner field and winning as he liked, with Sizing John a distant second. 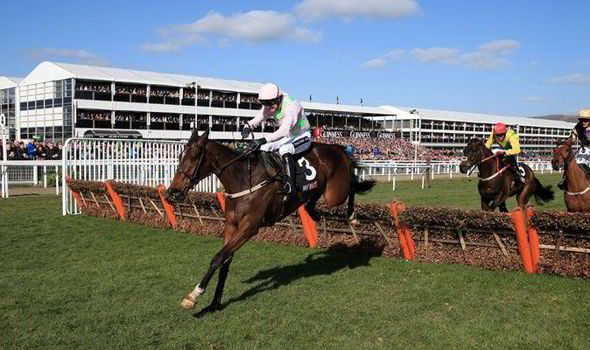 By the time the 2017 Champion Chase came around, Douvan looked untouchable. He simply couldn’t lose.  Sent of at 2-9 favourite, a procession was expected, but as Special Tiara pressed on down the hill, all was not well. Ruby Walsh pushed the button, but Douvans engine didn’t fire. An undiagnosed injury had left him lame, with even his racing career now in doubt. With what was later diagnosed as a stress fracture of the pelvis, Douvans future was uncertain.

2018 was dominated by speculation about Douvan. The Mullins team, as per usual remained tight-lipped, with several rumored comebacks coming and going with no sign. That he made it to Cheltenham at all was miraculous. As the Champion chase jumped off no one knew what to expect. For a brief moment, the old Douvan was back, he looked the champion from 2015 and 2016, travelling well he took up the running at the 7th. Only to take a crashing fall 4 out, when still travelling powerfully.

Although only briefly, Douvan had shown that he retained his class and ability. A subsequent defeat by Un De Sceaux at Punchestown can perhaps be forgiven, put down to a broken season almost certainly aimed at Cheltenham, not Punchestown. Let us also not forget that Un De Sceaux is a multiple grade 1 winning superstar in his own right.

2019 remains a mystery. Ideas of a step up in trip, whispers of a Ryanair or even a Gold Cup campaign can be heard. There must also be a desire to stay at 2 miles, head back to the Champion Chase and right the wrongs of 2017 and 2018. Given their past record, the Mullins and Ricci team are unlikely to tell the world the plan anytime soon. He is unlikely to appear in the UK before Cheltenham, a quiet start in Ireland has always been the preferred route.  Right now he is 12/1 for the Champion Chase, 10/1 for the Ryanair and 25/1 for the Gold Cup, but which race he would run in is a complete guess for any punter. In contrast, to win any race he is 8/1. Now if, and it’s a big if, Willie Mullins can work his magic and get him ready for Cheltenham, then 8/1 in whatever race he lines up in would be great value. Offered 8/1 on Mullins being able to return a Superstar like Douvan to his former peak as a standalone bet, most punters would lump on. If the Douvan of 2016 does return at Cheltenham this year, he will not be 8/1 on the day.

Sizing John is perhaps a much clearer picture. If he is fit and well, he will run in the Cheltenham Gold Cup, for which he is currently 12/1 4th favourite.  Jessica Harrington is showing her amazing skill and versatility as a trainer, her Flat star Alpha Centauri is testament to that and there is no reason to doubt that she will be able to get Sizing John ready for battle again.  With all the celebration of the 2018 race, it has perhaps become easy to forget that Sizing John beat Native River into 3rd when winning the 2107 Gold cup.  Recent Gold cups have become grueling wars of attrition, Lord Windermere, Coneygree and Don Cossack have all been successful, only to fail to return to those heights ever again. So it will be asking a lot for Sizing John to regain his crown, but he was a young 7-year-old winner and will only be 9 in March, leaving some time at least on his side. 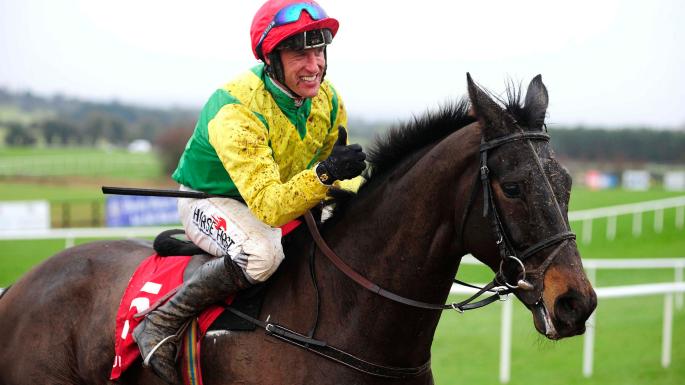 His early career did not suggest he was a future Gold cup winner, raced mainly at 2 miles; he became little more than Douvans shadow. A Supreme novices, an Arkle, a Punchestown Ryanair Novice Chase and a Leopardstown Paddy Power chase all yielded a win for Douvan with Sizing John in behind. A new plan was needed.

A step up in trip at Thurles in the Kinloch Brae (2m4f) led to a much deserved win. Upped again to 3 miles in the Irish Gold Cup at Leopardstown brought a first grade 1 success. Time for his finest hour, sent off at 7/1 for the 2017 Gold cup, he travelled throughout and pulled clear up the Cheltenham hill to win by 3 lengths. 3 miles had been the making of him, at Punchestown he duly followed up.

2017/18 began well for the champion, with a Grade 1 win in the John Durkan chase at Punchestown. However a lackluster 7th in the Christmas Chase raised many doubts and a subsequent pelvic injury ruled him out of defending his crown at Cheltenham.

This seasons reports seem good. Sizing John is recovering well and is planned for a return to the track. Whether he can reach his 2017 peak remains to be seen. With all that he has achieved so far, it is perhaps hard to remember he is still only an 8 year old. It’s also very hard to place where a fully tuned up Sizing John would fit in a pecking order with the big guns of Native River and Might Bite. Those 2 are warriors in their own right who competed in arguably the best Gold cup of the last decade.

Right now Might Bite is 5/1, as is Native River, with the champion novice Presenting Percy at 6/1, all shorter odds than Sizing John. Given the anticipated hype surrounding a potential rematch between last years 1-2, there is a strong likelihood of a small field Gold cup. Connections of those below the top table may be tempted to look elsewhere at the festival. If he is fit, Sizing John will line up for the Gold cup on that special Friday in March and 12-1 could represent solid each way value for the places at the very least. Given his running style, he is assured a strong pace to aim at and has a great chance to be in contention at the top of the hill as he was in 2017.

Now it’s only September, so it is very early to be considering any kind of ante post investment for 2019, many may prefer to wait for the first run of the year. However, a good first run and these prices will be gone. Given the mercurial abilities of their two master trainers, 8/1 for Douvan and 12/1 for Sizing John could look incredible prices come March. 🙋‍♂️Have you signed up yet with leading bookmaker @brucebetting to avail of their promotion for new Irish customers?